The poster provides an insight into the perspective that Ford's movie adopts towards Lincoln in his younger, pre-presidential days. Not only is he a muscular pioneer. He's also a thoughtful, contemplative man. This Lincoln also has an eye for the ladies. He's adaptable - a farmer in one frame, a courtroom lawyer in another, then a politician. The genius of  Henry Fonda's portrayal of the young Lincoln is that it reveals the different facets of Lincoln's personality, including his sense of humor, while also conveying a sense that the man is steadily growing in wisdom and integrity despite the domestic and personal difficulties with which he has to contend.
A modern advertisement for Young Mr. Lincoln, like the sepia-toned DVD cover above left, gives heavy prominence to its director, John Ford. But when the movie was released in 1939, posters emphasized its producer, Darryl F. Zanuck, and its cast. The posters also made much of the family  and romantic aspect of this stage of Lincoln's life. The poster on the right shows a young Lincoln in workingman's garb, a man of the people. His determination is indication by his clenched fist. The central poster shows a Lincoln in more formal clothes, appropriate for a lawyer. In both posters he appears to be confronting a crowd. 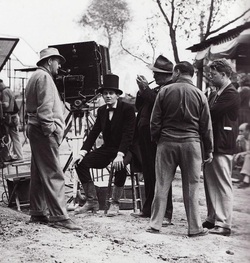 John Ford, left, on set with Henry Fonda.
The critic Richard Franklin maintains that the movies of John Ford make him  "at the very least the US’s greatest historian (his films having examined virtually every era from the Revolutionary War to Vietnam)".
As with most Ford films that have a basis in history, Young Mr Lincoln transforms a basis of historical fact into mythology. Ford retains the essential details of Lincoln's formative years: his experiences as a shop-keeper, his struggle to learn the law, his campaigning for office. But several crucial even ts in the movie are of dubious historical authenticity, although they make for a great story. It is uncertain whether or not Lincoln courted Ann Rutledge or that her death of typhoid fever in 1835 plunged Lincoln into depression. There is little evidence for a pioneer family giving Lincoln his first law book as a payment for provisions. The vital court case so vividly depicted in the movie was based on an actual murder case that Lincoln defended, but in real life it did not involve the two brothers which the movie shows Lincoln saving from a lynching and then successfully defending in court. The trial  - of one man, not two - occurred not in Springfield, Illinois, but in Beardstown in that state.
During an amazing twelve-month period in 1939-1940 Ford made not fewer than four masterpieces: Young Mr. Lincoln, Drums Along the Mohawk, Stagecoach and The Grapes of Wrath. No other director in cinematic history has ever remotely approached this astonishing burst of creativity. Although each is separated from its companions in terms of subject matter and setting, all four share one feature. Each is an examination of the importance of community / family as a factor that supports yet challenges the individual. The critic John Baxter believes that "a powerful sense of community" in a crucial element in Ford's movies.
The two excerpts from the movie below reveal different forms of community spirit,and also provide insights into Lincoln's personality -courageous, witty, adaptable , easy-going when necessary - as interpreted by Ford.