The Imitation Game:
a movie about the Enigma Machine, Alan Turing and the Bletchley Park code-breakers 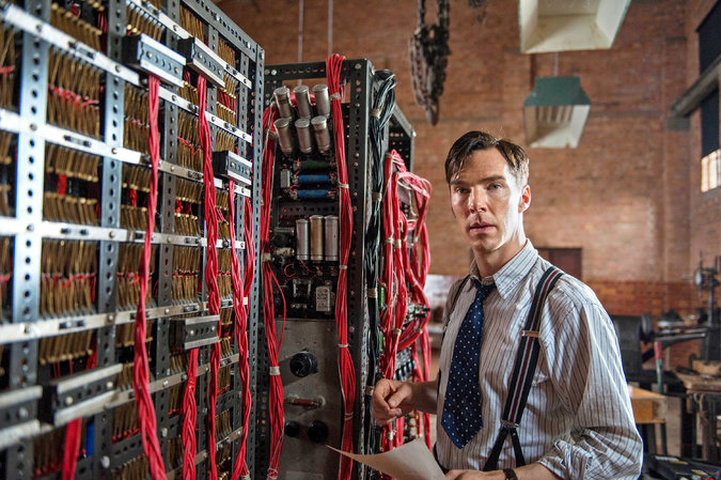 Alan Turing did NOT invent the Colossus machine,nor despite the claims of "The Imitation Game", the "Bombe" device featured so prominently in the movie and shown in the above scene.
The Imitation Game, the latest movie based on World War II's Enigma machine is the first to acknowledge Alan Turing's crucial role.
The Enigma machine was originally a commercial German encoding apparatus developed after World War I. It resembled a typewriter, but
used  complicated sets of rotors, to change the letters or combinations of letters in a message or document into what seemed to be randomly selected substitutes. The rotors produced  billions of possible combinations for the original message. A recipient with another Enigma machine used a key to unlock the code. During the 1920s and 1930s the German military transformed this commercial encoding device into an incredibly sophisticated  encoding system to transmit top-secret orders and messages to German military units on land and sea. However, the Germans were unaware that Poland's Cipher Bureau, with its team of brilliant mathematicians and cryptologists, had not only unlocked secrets of the Enigma Machine's encoding method. They had also made copies of the machine.
The significance of the 'Enigma Machine', and the unlocking of its secrets by a team of cryptological and mathematical geniuses at the top secret English location of Bletchley Park remained unknown and unheralded for many years after the end of the war. In the last couple of decades,the general public has become aware of  the crucial role that Bletchley Park (and in particular the mathematician Alan Turing)  played in unravelling Germany's military secrets and helping win the war. The main target of the Bletchley team was not the German's original so-called 'Enigma'  cipher but the more technologically sophisticated version code-named 'Tunny' by the British. Many documentaries have been made about Enigma, Bletchley Park and Turing. Yet despite the controversial conflicts, issues and personalities surrounding the topic, before 2014's release of The Imitation Game, only two feature films have been based on this richly dramatic subject.
The latest attempt, The Imitation Game, is the first to feature the work of Alan Turing, the English mathematical genius and pioneer of artificial intelligence. The movie focuses on Turing's attempts to break the secret of Enigma while at the same time trying to conceal the secret of his sexual identity.However, The Imitation Game is very misleading - or downright inaccurate - about several key issues. Turing and the team at Bletchley was not the first to break the Enigma code; that had been done years before by the Polish Cipher Bureau. And the imposing machine that is a central feature of the movie and which is supposed to have broken the key German naval code  was not designed by Turing nor was it built at Bletchley. Nor was Turing ever blackmailed by a Soviet spy working alongside Turing's Bletchley team.
THREE EARLIER MOVIES ABOUT THE ENIGMA MACHINE
U-571  (2000)

The first of these was an American war movie, U-571, released in 2000, about a U.S. submarine trying to capture an Enigma machine from a German U-boat. Briskly directed and well paced  by Jonathan Mostow ( Terminator 3 and Surrogates), a good script from  David Ayer, future director of Training Day and Fury. The movie had excellent technical values (it won an Oscar for best sound), finely detailed submarine sets  and is throughly entertaining.The scenes inside the U-Boat are convincingly claustrophic, and the seaborne operation to seize the submarine's Enigma is detailed and exciting, culminating in a tense and convincing climax.  Dr.Lawrence Suid,an  academic historian of naval warfare has praised U-571 as "probably the most exciting submarine movie ever made."
Although U-571 received good reviews and a good box-office reception in the USA,
it was viciously received by many naval veterans  and journalists in the United Kingdom , who derisively pointed out that in fact British naval units , not American, were the first to capture an intact Enigma machine from from a U-Boat in 1941. (HMS Bulldog forced U-110 to the surface , the German crew abandoned her, believing it was sinking, and a British boarding party entered the submarine, taking the Enigma and German naval codes.)  In  fact, the final seconds of the film include an acknowledgement that the captruing of the Enigma machine and its codebooks from a German submarine  had been achieved earlier by a British naval expedition.
So heated did the argument become that the British Prime Minister Tony Blair agreed with a questioner in the House of Commons that the film was "an affront" to British sailors. President Clinton tried to calm things down by writing a letter declaring that the movie was fiction, not history. In the midst of the uproar, Davbid Balme, the British naval officer who courageously led the boarding party that seized the Enigma from the abandoned and presumably sinking U-110, called the movie "a great film." However, six years after the film was made its writer, David Ayer, declared that he "did not feel good"  about the movie'sdepiction of Americans, not British, obtaining the Enigma machine in the way shown in the film."It was a distortion."
The Allies captured a total fifteen  Enigma machines from U-boats during the war. All but two were seized by British units. The Royal Canadian Navy captured one and the American navy took over a Machine from U-Boat (U-505), in 1944. This episode seized the submarine and its crew intact as well. In fact, you can see U-505, a magnificent vessel,  on display today at the Chicago Museum of Science and Technology. 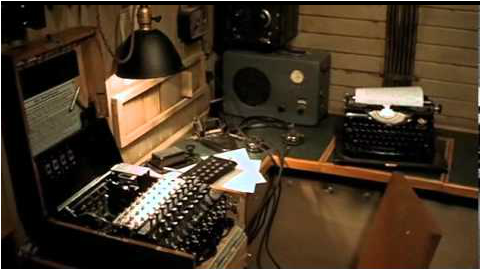 U-505 on display in Chicago Museum of Science and Technology.

This movie has an interesting pedigree. It was co-produced by Mick Jagger, [Jagged Films] who apparently owns an Enigma machine and lent it for some scenes in the movie. The script is adapted from Robert Harris's first-rate historical thriller by by the great British playwright Tom Stoppard and it is directed by the reliable and talented Michael Apted. Plus  the  music is by the great  John Barry and its stars Kate Winslet in one of her best performances. It's a pity that her acting talents and those of co-star Jeremy Northam  are offset by a listless and unconvincing Dougray Scott as the ostensible hero. One of the movie's most attractive features is the way it evokes  John Buchan's classic spy thrillers and class ic Hitchock thrillers of the 1930s. The movie has been criticised because although it's based on the Bletchley park and decoding the Engma encryption, there is no mention of the crucial role played b y Alan Turing. (Although the movie offers some hints: Dougray Scott's character is an emotionally  tormented figure recovering from a breakdown.
Although Enigma is about World War 2, especially the Battle of the Atlantic, and the attempts to counteract the Germans by breaking their Enigma codes, the strongest part of the movie focuses on the fictional tensions and intrigues amongst the team at Bletchley Park, where the team has to not only uncover the secrets of Enigma but also try to unmask a possible German spy in their midst as well as investigating the mysterious disappearance of a beautiful female code-breaker who has besotted Tom, the genius mathematician hero [Dougray Scott]. To complicate matters, Tom has to crack the german naval code in order to prevent the destruction of a vital Allied convoy. The film is invigorated by Kate Winslet's character, Hester: dynamic, a bit dowdy, intelligent, and in love with Tom. For the most part, the two halves of the plot - breaking the code and finding the presumed traitor at Bletchley - mesh smoothly until an awkward and rushed conclusion.
An interesting aspect of the movie is that it includes scenes depicting the infamous Katyn Forest  massacre  (near Smolensk, Russia) of 1940, where over 4000 Polish military officers were executed by Russian NKVD units on Stalin's orders. This scene which is pivotal to the plot and is part of the climax of Harris's novel, is awkwardly placed near the movie's beginning.
However, Enigma ignores the crucial role of  Poland's Biuro Szyfrow (Cipher Bureau). Polish codebreakers had not only worked out how the Enigma machine functioned years before Bletchley Park. They had made their own copies of the machine  and sent two to Britain when the Nazis Poland invaded Poland as well as vital decoded German transcripts. Yet for decades the Polish contribution - which saved the Bletchley codebreakers years of work - was ignored by Britain.
Kate Winslett is impressive as a determined Bletchley Park team member dedicated to finding out what happened to a missing colleague and to help the object of her affections crack the German naval code. Although her character is fictional, in fact women were a vital part of the Park's work force. Most were employed in administrative, transcriptive and secretarial functions, but some, like Joan Clarke and Marion Body,  worked alongside Alan Turing and other top decoders.
One of the administrative staff was Valerie Glassborow, the grandmother of Kate, Duchess of Cambridge, who had a tedious job in Hut 16 - she and others monitored British listening stations to see that they were sending in regular reports of German radio activity.
Above centre, Valerie Glassborow, the Duchess of Cambridge's grandmother in her uniform. Image at left shows the Duchess operating a replica of a listening device at Bletchley park; image right shows her talking to Lady Marion Body, one of the talented women cryptologists who worked at Bletchley.
﻿Excellent documentary about the Enigma machine and Bletchley Park﻿

Both U-571 and Enigma are, in their different ways, thoroughly entertaining and well-made movies. The same cannot be said about the British film All the Queen's Men, made about the same time as these two films. Roger Ebert deservedly assigned to his list of the worst films he had seen in his book Your Movie Sucks. It's a comedy that also tries to be an action movie, but is neither funny nor exciting. In addition, it contains some of the clumsiest acting ever witnessed - hardly surprising, seeing that its leads are Matt LeBlanc and Eddie Izzard. You have been warned.
So what is this disaster of a movie's connection with the Enigma machine? Its plot concerns the efforts of British army unit sent undercover to snatch an Enigma machine from the  French factory which makes the devices. The factory  is staffed only by French women (the French male workers are unavailable because they're  either underground or have been sent as cheap labour to Germany). So the four soldiers dress as women  to get into the factory . Unknown  to them, they are expected to fail and fall into German hands, thereby convincing the Nazis that the Allies don't have a copy of the Enigma, which they actually do. Did I mention that at one stage they are mincing about Berlin? Or that they stage a drag routine before an audience of appreciative Nazis?
The film assumes that the audience will find the sight of four soldiers in drag trying to con Nazi  to be incredibly funny. But unless the actors and the directer are talented and working from a good script (Some Like It Hot),  the set-up will quickly become tedious and repetitive. This is the fate of All the Queen's Men.