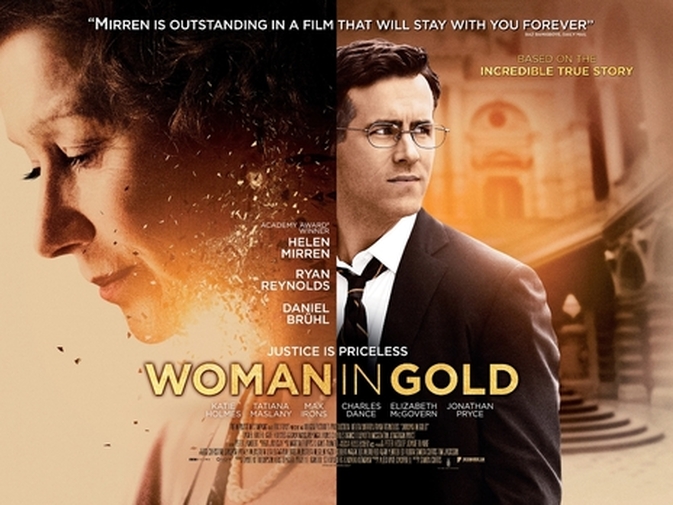 The background
In 1938 Nazi Germany used the threat of force to annex its smaller neighbour, Austria. In effect, Austria now became part of the German Third Reich. A policy of anti-semitism was swiftly implemented. Thousands of Jews were rounded up and incarcerated; Jewish properties and businesses were confiscated. A priority target for top Nazi leaders was the artwork purcahed that had been purchased by some of Vienna's leading Jews. These included many examples of earler twentieth century art, now acknowledged as masterpieces.
Among these stolen culturally and financially valuable artworks, were several works by Gustav Klimt, a significant early twentieth century artist from Vienna. The movie is based on one of these paintings - the so-called 'Gold' portrait (1907 ) of his patron, the Viennese socialite Adele Bloch-Bauer. The Nazis displayed the painting in Vienna's Austrian Gallery, where it remained for decades.
But in 1998 an Austrian journalist, Hubertus Czernin, published his investigation into what had happened to Nazi art thefts and raised the issue of restitution for their original owners. His book on the subject used the 'Gold' portrait as its cover.Eventually Czernin's research enabled Maria Altmann, the sole surviving heir of the Block-Bauer estate to use the legal expertise of E. Randolph Schoenberg to sue the Austrian government in 2004 in an attempt to claim the painting for Altmann.

What was the 'Gold' Portrait? 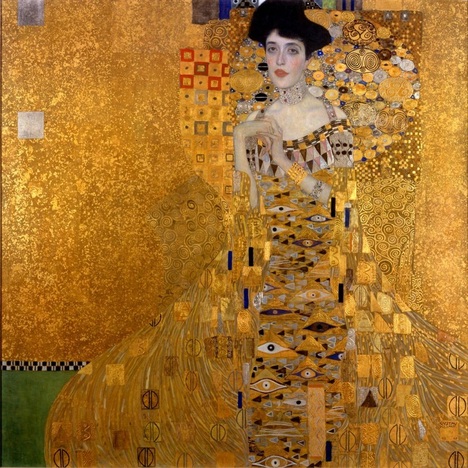 The 1907 painting depicts Adele Bloch-Bauer,the wife of the wealthy Austrian banker and sugar magnate Ferdinand Bloch-Bauer. At the Bloch-Bauer's Vienna mansion she was the hostess of a legendary artistic salon, in which the city's glitterati  feted Vienna's artistic talent. The magnate commissioned the  famous Symbolist artist Gustav Klimt to paint his wife. It took Klimt, who was rumored to be Adele's lover, three years to complete the portrait.  It was originally intended as a present for her parents' wedding anniversary.Adele's husband was so pleased with the painting that he commissioned another from Klimt. This was completed in 1912.
The 1907 portrait was significant for several reasons. It was the product of hundreds of drawings and sketches carefully honed to finally produce a dazzling art nouveau masterpiece that revealed not only the subject's personality but also her upper-class bourgeois social and intellectual milieu.
The intensely luminous golden tones of the portrait are the results of Klimt applying gold leaf directly to the canvas. It also reveals Klimt's controversial use of decoration and design in art. He sought to produce a Gesamtkunstwerk -'total work of art' -in which the fine arts and the decorative arts merged. Realistic and abstract elements are combined.  The painting also shows another feature of Klimt's style: using motifs from Byzantine, Greek  (even Minoan) and Egyptian art. For example, there are clusters of eyes, geometric circles, spirals, deltas, ovals, all with erotic connotations. A close examination shows myriad small A's and B's dotted amongst the gold.  Her pale face, shoulders and arms make a counterpoint to the sumptuous gold of her dress and background.  he portrait resembles a Byzantine icon, with Adele presented as an object of veneration, almost a religious idol. It shows the influence of the sixth Century moasics of Byzantine empress Theodora which Klimt  saw at Ravenna. The vibrancy of the colours  contrasts with the subject appearing to confined and two-dimensional within the confines of the painting's frameframe
Klimt, however, never claimed he was revolutionising art at all.  He disliked travel, wrote no autobiography or artistic manifesto. He slept with many of his models and subjects of his portraits, fathering possibly as many as fourteen children.  Despite his  energetci love life, he seems to have lived peacefully and remained on good terms with his countless lovers. He claimed only that "I am a painter who paints day after day from morning to night... Who ever wants to know something about me... ought to look carefully at my pictures."
Klimt appears to have slept with many of the women whose portraits he painted. Klimt apparently fathered at least three and as many as fourteen children, kept a full-time mistress and lived with his mother until a couple of years before his death in 1918. KLimt was one of the victims of the 1918 influenza pandemic.
Who was Adele Bloch-Bauer?
Unlile Klimt, Adele was born into a life of privilege and wealth. She was the seventh child of the famous Viennese banker (and director of the Orient Railway) Moritz Bauer. Intelligent, mercurial  and intellectual, apparently frustrated by the restrictions her social milieu imposed on determined and clever young men, she married early, at age eighteen. Her husband, seventeen years older, was Ferdinand Bloch, an industrialist and her brother-in-law. In 1917 both men added their wives' maiden name to their surname, hence Bloch-Bauer. Adele's marriage produced no children, eventually resulting in a contentious will that later caused so much controversy.
Her distinctive narrow face which seemed to simultaneously  convey arrogance, privilege and suffering perfectly captured the intellectual milieu of the world of Vienna salons in the early twentieth century. Adele and her husband kept an extensive art and porcelain collection in their luxurious  home. After Klimt's death in 1918 she kept one room as shrine to Klimt, displaying his paintings there as well as a photo of the artist.
Adele died suddenly of meningitis in 1923. Her husband turned the Klimt room into a memorial space for his wife. 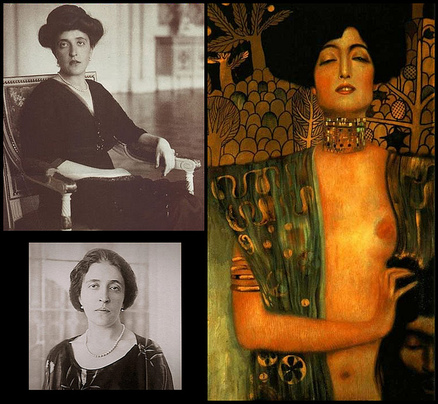 Adele Bloch-Bauer above left and above right, Klimt's 1901 allegorical portrait "Judith", for which Adele was probably the model. The painting of the Jewish heroine (she saved the Israelites by beheading Holofernes) caused a scandal at the time.
Two Wills and Their Consequences
Adele's will contained a seemingly innocuous clause. She requested that, after his death,  her husband donate the couple's Klimt paintings to the Austrian Gallery in Vienna. But in 1938 Hitler took over Austria in the Anschluss and merged it into the Third Reich. The Nazis systematically looted the art collections  of Austria's Jews. Some pieces were sold off for private gain, some exhibited in museums and some incorporated into the collections of top Nazis like Goering. Similarly the Bloch-Bauer's collection of Klimts and other art works were "Aryanized."
Unlike any of his fellow Jews, Ferdinand Bloch-Bauer understood Hitler's intentions  and fled, initially to Czechoslovakia and finally to the safety of  Zurich. He lived there - "totally impoverished" in his own words - until his death  just after the war ended in 1945. He requested that the stolen art works be traced and recovered. Crucially, his will also named his nephew and nieces, including Maria Altmann, as the inheritors of his estate. But the art works remained scattered for decades, some in private collections, some in Swiss bank vaults,  others exhibited publicly in museums. The Austrian authorities appear not to have made any attempt to fulfill their legal obligation to return the works to surviving family members. For years Austria denied that it had any obligation to return hundreds of looted art works to their rightful owners / descendants.
﻿Who was Maria Altmann?﻿
Maria Altmann  [1916 - 2011] was Adele Bloch-Bauer's niece. When she was nineteen she married Frederick Altmann, brother of a prominent Austrian industrialist. But when Hitler took over Austria the next year, Frederick was held in Dachau concentration camp as a hostage in order to force his brother, who had gone to France,  to hand over his large and prosperous textile factory to the Nazis. On Frederick's release, he and Maria fled for safety, leaving  all their property to be confiscated by the Nazis. Eventually they were able to escape to America. Eventually Maria, an astute business woman, started a successful clothing business in California. In 1945 she became a naturalized American citizen. In that year the childless Ferdinand Bloch-Bauer died. His will left his estate to a nephew and two nieces, one of whom was Maria Altmann.
It wasn't until Altmann was eighty-two that the famed Austrian investigative journalist Hubertus Czernin provided evidence that she could claim legal title to the five Klein paintings bequeathed by  Ferdinand Bloch-Bauer and seized by the Nazis in 1938. The most famous, the 'Gold' portrait of her aunt, had been on display in the Austrian National Gallery in Vienna for years.  But the Austrian government denied she had any claim. The gallery even provided a notice for visitors, claiming the portrait was "bequeathed by Adele and Ferdinand Bloch-Bauer."
Altmann's legal case was taken up by Randol Schoenberg (grandson of the famed composer, who had been one of the habitual attendees at Adele and Frederick's Vienna soirees. Schoenberg shrewdly  who pursued the matter in U.S. courts, thus avoiding the expense and administrative and other difficulties of using the Austrian court system.
The movie's Altmann (Helen Mirren) and Schoenberg (Ryan Reynolds)  (left) and the real couple (right), in front of Klimt's second painting of Maria's aunt. Middle: Maria with what appears to be a copy of the iconic portrait .
Why does the movie downplay the crucial role of journalist Hubertus Czernin?
The movie omits much of the complicated legal manoeuvring that followed Schoenbrg's advocacy for Maria Altmann. Although it underplays Czernin's crucial role in obtaining documentary evidence - especially about Frederich Bloch-Bauer's 1946 will - Woman in Gold outlines the main arguments made by Schoenberg in his long legal struggle on Maria's behalf. Schoenberg used Czernin's document to prove that Adele did not bequeath the Klimt paintings tp the Austrian museum. Her will merely requested that her husband donate the paintings on his death. This was merely a request not a bequest, before Fredreick not Adele was the legal owner of the art.  The Austrian authorities  knowingly lied when they claimed otherwise. Furthermore, Frederick's 1946 will specifically bequeathed the art work to his nephews and nieces. And Schoenberg also pointed out that Adele would hardly have wanted her portrait to be handed over to the same Nazi Austria that stole it from her husband in 1938 when she made her request before her death in 1925. 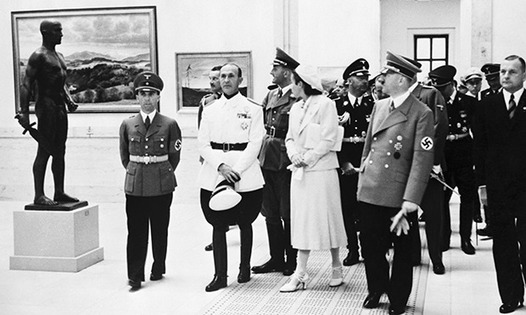 Hitler inspects a 1939 exhibition of 'approved' German art (i.e. no modern influences permitted). It included works stolen from Jewish owners.
Woman in Gold's depiction of Vienna's treatment of Jews in 1939
One controversial aspect of  Woman in Gold is the movie's depiction of Jews being humiliated, harassed, beaten and arrested in Vienna in 1938 following the Anschluss, in which Hitler incorporated German-speaking Austria into the Third Reich. For decades after the war Austrian governments have tried to minimise their country's participation and acquiescence in Nazi war crimes. Austrian officials concealed the extent to which Austrians willingly joined the Nazi party and their willingness to treat Jews as racial enemies, while appropriating their property  and possessions.
Yet the movie has been criticised for being unfair to Vienna, Austrians and even the Nazis. Some reviews have argued that Austrians, especially their art bureaucrats,  are portrayed as cold-hearted, deceitful and obstructive. A surprising number of comments claim that the Austrians were the "first victims" of Nazi aggression with the Anschluss of 1938 and that the acts of anti-semitism shown in Woman in Gold were carried out by the Germans, not Austrians. The documentary evidence, including countless images, proves such claims to be nonsense. The German troops were greeted rapturously by crowds. Furthermore. mistreatment, harassment  and persecution of Jews was carried out by Austrian Nazis and civilians, with the approval of Austrian authorities.