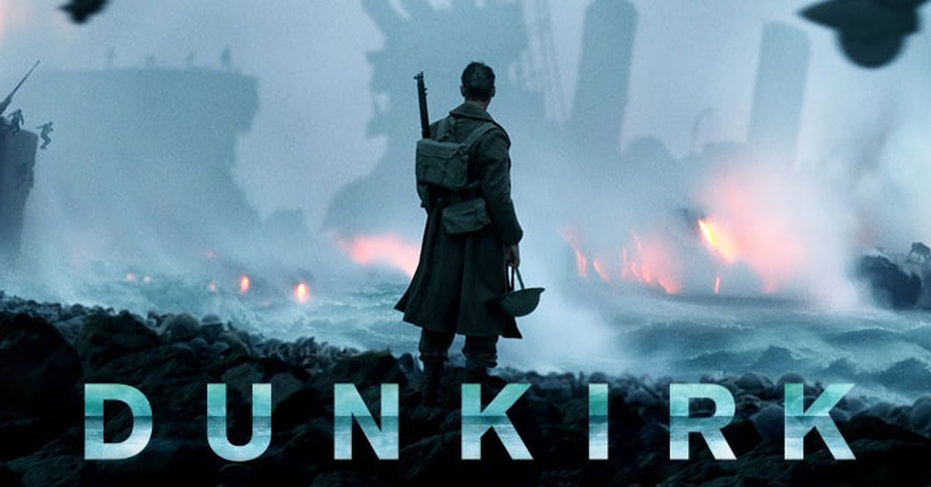 1. THE CRUCIAL SIGNIFICANCE OF THE EAST MOLE
Nolan's Dunkirk movie restores a little-known aspect of the evacuation - the crucial significance of the nondescript East Mole in Dunkirk harbour.. It has been taken for granted that the evacuation of Allied troops was largely achieved by their being taken directly off the Dunkirk beaches, either directly by the famous civilian fleet of small vessels, or conveyed to waiting naval and other larger ships.  In fact, about 70% of the troops were evacuated by way of what the French called the Jetee de l'est, or what the British came to call the East Mole. This was an unglamorous 1280 metre long breakwater, extending from  old shore fortifications to the harbour mouth. Its base was tumbled stone (perhaps concrete in places) on top of which were embedded tall wooden pilings, which were in turn covered with a flimsy wooden walkway about two metres wide. In effect it became a pier along which rescue ships could precariously berth to embark troops.
For the curious, the strange word "mole" comes from a 16th Century Middle French word meaning "breakwater", in turn taken from Latin "moles" = barrier, large structure. 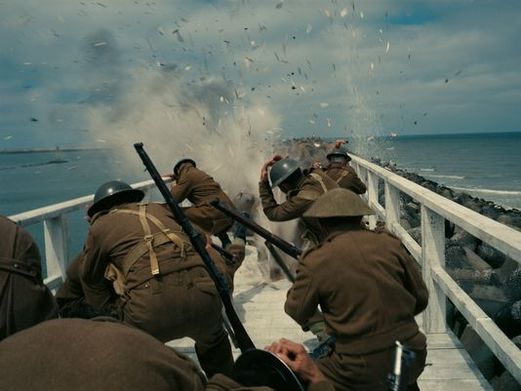 Soldiers on the East Mole attacked from the air in the movie.
Top two images clearly show the structure of the East Mole and how ships moored alongside to embark soldiers.
​Bottom right image shows how  vessels  berthed alongside the pier. Bottom left is a clipping showing aftermath of evacuation. It clearlyshows the considerable length of the East Mole as well as the amount of equipment the Allied forces had to abandon.

THE PIERMASTER AT DUNKIRK; WHO WAS HE?
In Nolan's movie, the Piermaster - naval officer in charge of embarkation is a fictional figure - named Commander Bolton) - and is portrayed by Kenneth Branagh in a manner familiar to older viewers who watched Kenneth More portray dozens of stoic British pilots, soldiers and naval officers in war movies of the 1950s and 1960s. The actual Piermaster was W.G.Tennant, who had been sent to Dunkirk as Senior Naval Officer by Vice-Admiral Bertram Ramsay, along with a staff 0f 12 officers and 150 seamen. Tennant and his team managed to impose order and a systematic approach onto a chaotic scene on the beach. Tennant later explained to his superiors:
As regards the bearing and behaviour of  the troops, British and French, prior to and during the embarkation, it must be recorded that the earlier  parties were embarked off  the beaches in a condition of complete disorganisation. There appeared to be no military officers in charge of the troops …. it was soon realised that it was vitally necessary to  dispatch naval officers in their unmistakable uniform with armed naval beach parties  to take charge of the  soldiers on shore immediately prior to embarkation. Great credit is due  the naval officers and naval ratings for the restoration of some semblance of order. Later on, when troops of fighting  formations reached the beaches, these difficulties disappeared.

2. Did the Germans really drop leaflets urging Allied troops to surrender at Dunkirk?
They certainly did, and the movie's  closeup shot below of a leaflet is a perfect copy of one of the actual leaflets shown below . Note that one of the leaflets is in French as well as English. 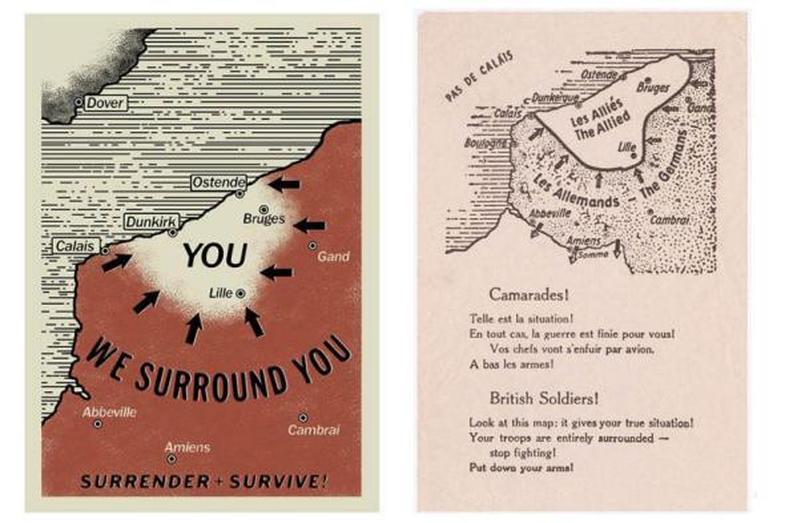 Tom Hardy as Spitfire pilot in action over Dunkirk.
p.387    =To this day the raiment legend of Dunkirk centres on the “little ships” and the beach, but  [Tennant  wrote “The deserters put up by far the finest show of any of the forces  concerned with the evacuation. After them I would put the personnel ships [passenger streamers], closely followed by some of the officers and men of the beach parties, who worked waist deep in water  getting men away until they practicecally dropped in their tracks.