Generation War is unusual in that unlike most of its movie / television counterparts it devotes considerable screen time to how the war affected the lives of German women. Two of its five main characters are women and both of them have occupations and are unmarried. Charlie is a field nurse with a front-line regiment (it a most unlikely coincidence , it  includes her two brothers). Her occupation provides two of the series' strongpoints:  a realistic and convincing portrayal of treatment of wounded at a frontline field hospital as well as a good character study of how the initially scared and not particularly competent young nurse gradually gains confidence and skill. The other woman is Greta, the most complex and interesting character in the series. She is a talented and fiercely ambitious singer in the Marlene Dietrich mode. While she is quite happy to use her liason with an influential SS officer to advance her singing and recording career, she also uses that relationship to try to protect her Jewish boyfriend. Having become  a popular recording and performing artist, Greta initially displays callousness and and selfishness which gradually disappear as she belatedly becomes aware of the true nature of the Third Reich. By the end of the series she has become a decent and honorable person, even  a martyr figure, but not in a sentimental, cloying way. 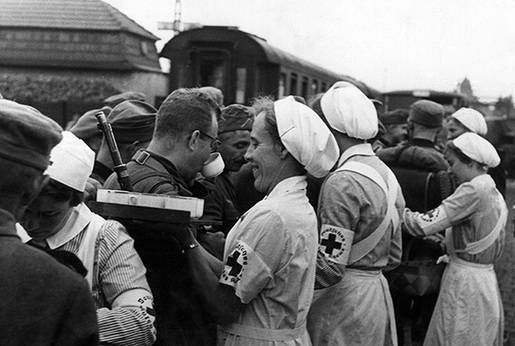 German frontline nurses feed invading troops, Poland, August 1939.
Generation Wars' depiction of  its two German heroines as working women, childless,unmarried, and  removed from a domestic setting runs counter to the  accepted view that German women during the war were essentially supine paragons of domestic life, their roles essentially limited to those of child-bearer and wife. Certainly, this was the official Nazi ideology, based on the advice:
"Take hold of kettle, broom and pan,
Then you’ll surely get a man!
Shop and office leave alone, Your true life work lies at home."

Women should be good wives and mothers, have lots of children (if necessary, outside marriage), while their husbands worked or fought. Education was not a priority. Legislation established financial rewards for having children -after all, lebensraum required a growing populace which also provided replacements for warriors who died in battle. for the Fatherland. The posters below illustrate this theme of German women as essentially child-bearers
But in fact women did play a more varied and less stereotyped role during the war, as suggested in Generation War. Nazi ideology was over-ridden by the more essntial demands for female workers to take on some of the essential jobs formerly done by males who were now in the armed forces -or who had died in combat, air raids and prisons. Posters now urged women to become nurses, work in factories, and join auxillary branches of the armed forces, as shown by the posters below). As the war progressed, German newspapers and magazines published pictures of women employed in various occupations  or serving  in the military
Both the main female characters in Generation War emerge ultimately as brave, heroic women  - in fact, Greta becomes a convincing martyr figure. Although Charlie commits an unconvincing,  poorly motivated act of betrayal, she later redeems herself and receives a form of punishment in the form of rape by Russian soldiers. She eventually realises the monstrosity of the Nazi regime  and comes to identify herself with the victims oppressed by that regime.
But her stance is misleadingly untypical of the attitude of the great majority of  German women. As recent historical research has shown - especially Wendy Lower's Hitler's furies: German women in the Nazi killing fields - millions German women, like Greta and Charlie, did indeed participate in the German war effort in various ways, despite official Nazi ideology about women as homemakers and mothers. Thousands of German women were involved on the eastern front, like Charlie (and rather indirectly, Greta). But as Lower demonstrates, these women, unlike the heroines of Generation War,  were complicit in the atrocities of the Nazis and the Wermacht.  Some were concentration camp guards; the majority were nurses, typists, telephone, operators, teachers. Some hOne of the  most misleading features of Generation War is that neither Charlie or Great  -in fact none of the leading characters -  is a member of the Nazi party. Yet one-third of German women, Lower notes, were "actively engaged in a Nazi Party organisation". Those women who went east, says Lower,  used the opportunity as an expression of their modernity, independence, sense of adventure  and as a way to advance their careers. All these reasons were the very opposite of Hitler's stereotype of the role of German women. But unlike the heroines of Generation War, many of these women were imbued with a deep anti-semitism. AT least 30 000 of them belonged to the SS, some of whom participated in torture, brutality and executions of prisoners and concentration camp inmates. Almost all escaped punishment. 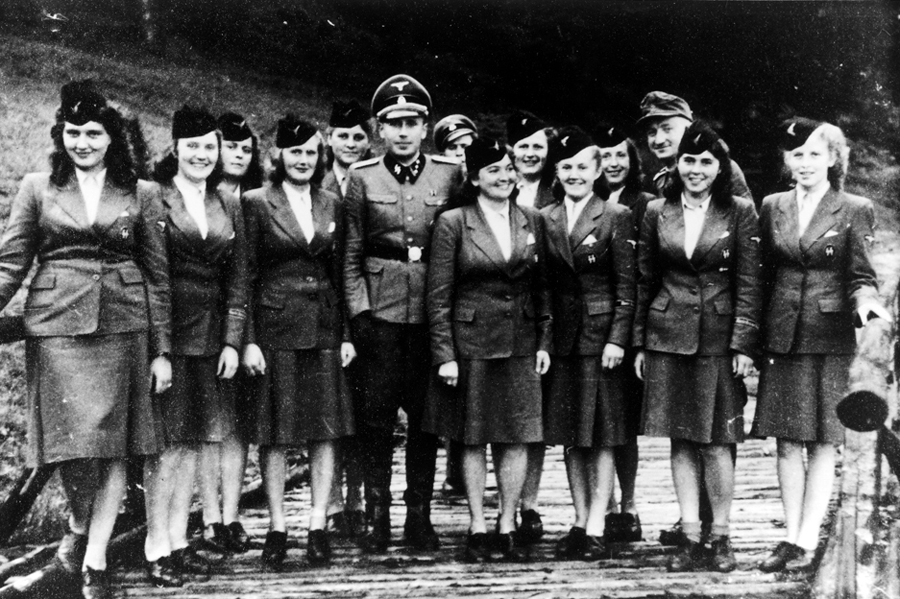 Concentration camp personnel have a day off.