Martha Gellhorn: the Woman and the Journalist 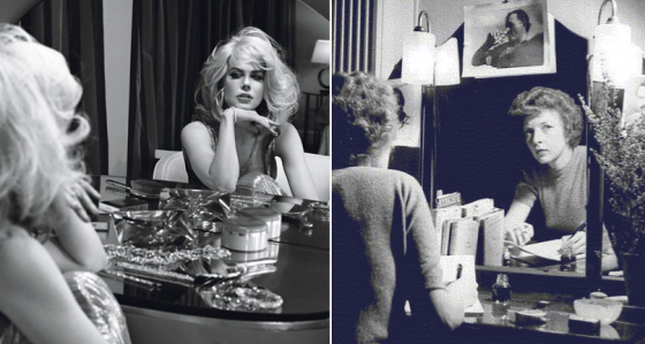 The real -life Gellhorn on the right; the more glamorous movie version on the left. Philip Kaufman's 2012 movie "Hemingway & Gellhorn" has rekindled interest in one of the 20th Century's leading journalists.

Gellhorn's troubled marriage to Ernest Hemingway meant that for much of her life she had to overcome being regarded as what she once  called a "footnote" in the biography of the famed author. She insisted on being regarded as a fine writer and journalist in her own right, irrespective of her relationship with Hemingway whom talents as a person, lover and author she decried after their divorce.  During the last two decades she has been lionized as a pioneering female journalist overcoming prejudice and preconceptions and as one of the best of the twentieth century's war correspondents. And the emphasis in her reportage on ordinary people and their sufferings in conflcts was hardly pioneering; she was following a trail blazed by earlier female foreign correspondents. Gellhorn's journalism made no pretense at objectivity; some of it resembled her political and personal judgements, infused with a bitter and disconcerting hatred and maliciousness. 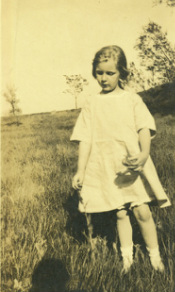 The young Gellhorn.
Gellhorn was born in 1908 into an educated and affluent  family in St Louis. Her part-Jewish father was a gynecologist; both he and his wife  Edna had liberal ideas on politics, parenthood, sex and education. Edna was a prominent suffragette in St .Louis. Both parents helped found a coeducational school, John Burroughs School, based on equal treatment of all students, regardless of gender. After attending this institution,and writing for its magazine,  she went to Bryn Mawr College in 1927, two years behind Kathryn Hepburn. However,  She failed several courses and did not graduate, claiming that the college "bored" her.
Instead, she decided to pursue a career as a journalist. For a few months Gellhorn worked as the sole female reporter for the Albany Times Union. This job included 'the police beat', where she spent time examining corpses in the morgue in between evading the attentions of the city editor and earning the nickname "the blonde peril". She eventually based her first novel, What Made Pursuit, on her six months there. After six months she went back to St.Louis, but found that city -like Bryn Mawr and Albany too conventional and confining.  She decided to go to Paris.

Gellhorn's meeting with Hemingway at Sloppy Joe's Bar  in Key West, Florida, in late 1936  has become famous, but some accounts of the meeting and its immediate consequences are mythical rather than historical.
* Sloppy Joe's Bar did exist (it still does, and holds an annual Hemingway look-alike contest) and Hemingway was a regualr  patron there for a time. Its owner was one of Hemingway's fishing companions.
*  Gellhorn and Hemingway did indeed first meet in Sloppy Joe's Bar  but under mundane circusmstances. Gellhorn's father had died in 1936 and her mother decided to spend Christmas with her two younger sons in Florida. Martha joined them in Key West and the four met Hemingway when they visited the bar, a local tourist attraction. Hemingway initially assumed that Martha and her younger brother were lovers. Hemingway and the Gellhorns had a conversation; some days later he took them to his home to meet his wife Pauline and his sons. Hemingway and Gellhorn had several meetings in which they discussed literature, writing and international politics, especially the Spanish civil war
• The pair's relationship was friendly but no more; the pair didn't sleep together until the next year in  Madrid.
* Gellhorn was not a novice or would-be author when she met Hemingway in Key West. Several of her articles had been published, her recent non-fiction book (The Trouble I've Seen) about the social and economic impact of the depression on Americans had received excellent reviews, and  she had already written one novel and was working on another.

" My whole memory of sex with Ernest is the invention of excuses, and failing  that, the hope that it would soon be over".
Letter from Gellhorn, , cited Caroline Moorhead, Gellhorn: a Twentieth Century Life (New York,2003),135-6

Gellhorn and Hemingway at the Congress of American Writers, Carnegie Hall, 1937

"About 10:30 all the foreign correspondents marched on [stage], each one with his private blonde, led by Ernest and Miss Gellhorn, who had been through hell in Spain and came shivering on in a silver fox cape chin-up.... Ernest gave a good speech....and his sum total was that ...writers ought to all go to war and get killed and if they didn't they were a big sissy".
Poet and playwright Dawn Powell, an acute observer of the American cultural scene, mocks the two celebrity writers at the Congress 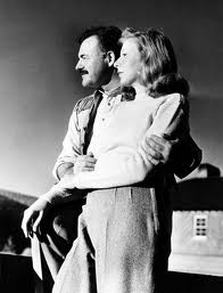 The recently married couple.
In 1938 Collier's  sent Gellhorn on assignment, not to Spain, but to other parts of Europe to report on reactions to a possible war. While Hemingway went back to Pauline and his children at Key West, Gellhorn covered France and Czechoslovakia at the time of the Sudetenland crisis. In November 1939  she went to Finland for Collier's, arriving in time for the Russian invasion and visiting the front lines. However, she left Finland remarkably quickly - claiming to be 'bored' - and met Hemingway (who was writing For Whom the Bell Tolls) in Cuba in January.
Later that year Bells was published to great critical and financial success. At the same time his marriage with Pauline ended in divorce on uncontested grounds of desertion. Martha and Ernest married  on 21 November in Wyoming. But she wanted to get back to the war and accepted a Collier's magazine assignment to go to the Far East. Hemingway, enjoying his increased wealth and fame, reluctantly agreed to accompnay her for part of the trip and do his own reporting for PM  magazine. Ther pair went to Hong Kong and then China.
When American entered the war after Pearl Harbor, Hemingway became increasingly preoccupied with his boat, the Pilar which he used for fishing and partying with his friends, and hunting Axis submarines. Martha mocked these grandiose military activities, his messy appearance and his increasing drunkenness, egotism and financial extravagance. She accepted Collier's  offer to report on the war in Europe aHemingway was content to stay in Cuba, drinking and hunting  (unsuccessfully) submarines.
Gellhorn arrived in London in the fall of 1943; most of her time there she lived in the comfort of the Dorchester Hotel.Despite claims to the contrary, she was accredited as a war correspondent and wore the official army uniform of one, as well as provided with the honorary rank of captain. As a woman correspondent, though, she was subject to restrictions on travel and access. After some months she went to Italy,reported on the vicious struggle around Cassino, and then went back to Cuba and an indignant Hemingway. "Are you  a war correspondent or my wife?" he cabled her. She found a bitter, boastful, alcoholic Hemingway, who had written nothing of worth for  three or four years, and who was humiliated by the complete failure of his sub-hunting exploits and jealous of Martha. Then he decided to go to Europe to write for Collier's  about the war, and was given status senior to Gellhorn.He travelled by RAF plane; Martha had to travel on a freighter in a convoy.She arrived to find Hemingway injured in hospital after a car accident, and showed scant sympathy. She also showed little enthusiasm for his routine of constant partying with old and new journalist friends, including an attractive Time reporter, Mary Welsh who also stayed at the Dorchester and whose company Hemingway increasingly sought. 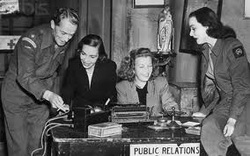 Gellhorn with Virginia Cowles.
After the final split with Hemingway, Gellhorn vigorously pursued her journalistic career for several more decades.She continued her coverage of the concluding stage of the European war, making full use of her liason with the dashing Gen. James Gavin, commander of the 82nd  Airborne. When Germany surrendered she was in Dachau, an experience which left her permanently disillusioned with humanity and a fervent supporter of Israel. From then on she went to almost every theatre of conflict in the postwar world, from Indo-China to the Six Day War. She co-wrote with  Virginia Cowles, a fellow war correspondent, a light comedy Love Goes to Pres, which proved popular in London but not New York. She also wrote several novels, such as The Wine of  Astonishment and The Lowest Trees Have Tops (about McCarthyism) and books of reportage and travel. In 1949 she adopted an Italian boy, Sandy, but soon left him in the care of relatives. Their relationship turned bitter. When he was twenty she told him in a letter that "You are a poor and stupid little fellow in my eyes. I'd be so damned ashamed to be you, I'd want to jump off a cliff."  She continued to have numerous affairs and in 1954 married  a Time managing editor, divorcing a decade later. As she got older Gellhorn seemed to get more embittered. She surrounded herself with a set of drinking and gossiping friends -"chums" - much as Hemingway had done in Paris, Key West, Cuba, London and Paris. Gellhorn, like Hemingway, committed suicide. Almost blind, in pain, deeply depressed, she drank poison.