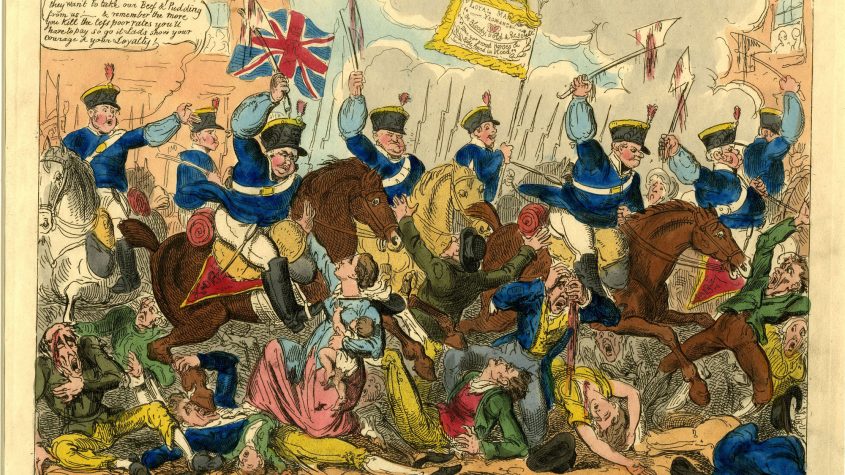 George Cruickshank's famous expression of artistic outrage at the events in Manchester, August 1819

WHY WERE THE PETERLOO DEMONSTRATORS PROTESTING?

The purpose of the August, 1819 meeting at St.Peters Field in  Manchester was to campaign peacefully for reform of the British parliamentary system in order to end its domination by elite and privileged groups such as the aristocracy. The campaign also wanted to ensure that the large and increasingly important sections of British population such as the industrial working classes and the commercial-middle classes were  given representation in the House of Commons. The big new industrial cities such as Manchester, Birmingham and Leeds, for example, had no M.P.s to represent them at all.
​ Many in the crowd had come from miles around to hear the famous reformer Henry Hunt, often known as "Orator' Hunt because of his ability to stir audiences with his brilliant speaking ability. Hunt and his supporters wanted universal male suffrage, as well as a secret ballot and annual parliaments.  Although at this time only a few women demanded the vote, women played a significant and highly visible role in organising and attending the fateful gathering in which hundreds of people streamed in from surrounding districts. The meeting was intended as a gala public occasion, with many families attending.
Whereas the new industrial and commercial areas of the UK had little or no representation in Parliament, many constituencies [electorates] consisted of very small villages which were literally owned by aristocrats [pocket boroughs] or with voters who numbered only a few who could be bought off [rotten boroughs].As the famous episode of Blackadder Series 3 shows -with only a bit of exaggeration - these small rural constituencies were literally up for sale or for use as a bribe or gift. 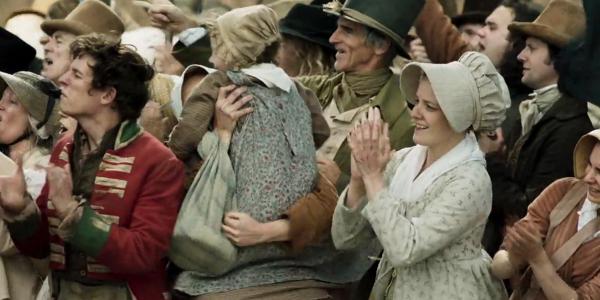 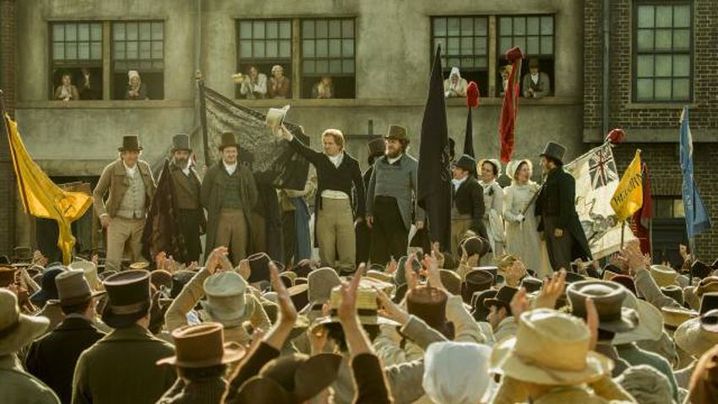 Leigh's movie is historically accurate in its depiction of women supporting the demands for parliamentary reform that were the intended purpose of the gathering. Some estimates suggest about 12% of the crowd were women. Estimates of those killed range from eleven to seventeen, including at least one woman (possibly four). And 64 of the 654 recorded casualties were women.
In fact, their presence and role their  reveals the emergence of politically active women on the nineteenth century British political scene. A few weeks earlier a Female Union was formed in Blackburn by Alice Kitchen, followed by the creation of other Female Reform or Female Union groups in Manchester, Royton and Oldham. These women's groups did not demand votes for women; they were formed to support male suffrage and urge other reforms in the parliamentary representation system. Instead they emphasised women as role models and their need to educate their children to oppose tyranny.
These Female Reform / Union groups also condemned  the unemployment, poverty, hunger and social that was a feature of the years following the end of the Napoleonic wars. They blamed the aristocracy and the rich landowners for the economic and social misery.