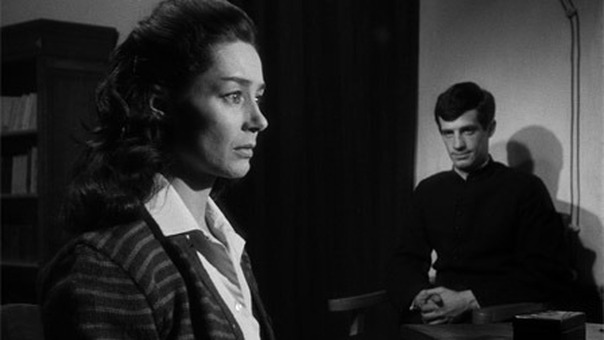 Jean-Paul Belmondo and Emmanuelle Riva in Melville's film set in Occupied France.
Melville's movie is primarily about temptation, religion and morality rather than war and the Nazi Occupation of France, yet its background and setting are firmly located in a French village that is occupied first by Italian forces, and then by the Germans. The primary concern of the movie is the priest (Jean-Paul Belmondo in a great performance) and his relationship with a young war widow - and a couple of other young females in the village. This is a film about spiritual faith, heavily overlaid with issues of asceticism and temptation, sexual and religious. The priest is well aware of his seductive powers in a context where war has deprived the village of most of its men: the remaining adults are mainly women whose husbands are dead,imprisoned or  away fighting for the Resistance. . 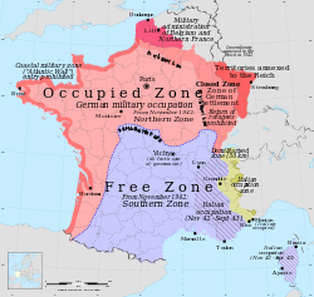 Hatched/yellow shading depicts Italian Occupation zone.
One of the most interesting and unusual features of Melville's movie, which in its original version ran for over three hours -and movies about the Occupation of France in particular -  is that it is one of the very few films that (at least in its first hour) concerns the little-known Italian Occupation of France. In June, 1940, after Hitler's Axis power partner declared war on France, Mussolini was rewarded with a sliver of territory in the hilly south-west region, a zone that was later extended. But in September, 1943, after Italy's surrender, German forces moved in, replacing the Italians and installing a harsher regime.
In Leon Marin, Priest the Italians are presented as benign, looking rather ridiculous with their ostrich-feather headgear and casual march through town. The villagers attitude towards them is one of wry tolerance, rather than fear or hatred. The German takeover is subtly and economically presented as a firefight at night between the Italians and the Germans, heard but not seen. On the other hand, the German forces are feared. Their power is subtly displayed in shots of their disciplined march through the town, road block signs and arrogant attitudes.
The Occupation of the village and its effects take place in the background. A German soldier [above left] says farewell to a child he has befriended; more ominously, a patrol marches through the village.
The evidence of Occupation and its effects are indicated subtly: outbreaks of armed struggle heard at night rather than seen, the presence of occupying troops on the streets,  the Star of David daubed on some buildings, the mocking yet scared expressions of villagers watching a German patrol, Resistance members quietly fading back into the surrounding hills. There is a brief shot, a reflection in a shop window, of Jews being moved for deportation. Then there is the virtual absence of males (except the young and elderly in the village), the references to husbands or relatives who are prisoners of war or away in Germany on labor schemes, the re-location of a correspondence school from Paris to the village. Within the school itself the women staff argue about anti-semitism; the school's Jewish male director leaves to join the Resistance. Some of the village women, including the war widow, Barny, who has a daughter by her dead Jewish husband and  who both tempts and is tempted by the priest, make arrangements to move and conceal their children, include obtaining baptismal certificates. Elderly women take care of these children. The priest himself uses the presbytery to shelter Jews on the run.
In tone with the movie's theme of moral ambiguity, the brief glimpses of the German occupiers are presented subtly. One scene shows a kindly German soldier who has come to say goodbye to a child he has befriended; a young German sentry seems as scared of the woman he has stopped from going down a road as the woman is scared of him. An arrogant German officer proves  ineffectual in dealing with the mockery of a young village boy. Towards the end of the movie an American soldier clumsily attempts to rape Barny while his comrade half-heartedly dissuades him.
In his essay on Léon Morin, Priest, Gary Indiana argues that this movie, made by a Jewish atheist, "is about almost anything except religion: the deleterious effects of sexual repression, the moral bleakness of wartime and life under occupation, the harsh inflections of history in ordinary lives." In an interview, the director declared that the movie was " a very Catholic film", although he maintained that  "what I think of faith, of the non-existence of God, of socialism, and so on, is my own private world, a world I try not to put into my films, because I try not to put into my films,, because I don't think it's my business to offer messages -political. metaphysical, or whatever." Melville's film, the critic argues, is characterised by "its lack of didacticism, its emphasis on anomaly: moral clarity is elusive at best, and even the most righteous people are a mess of contradictions."
(Source: Gary Indiana, booklet for Criterion DVD version of Leon Morin, Priest. This  excellent booklet is contains Indiana's fine essay on the movie, and the script of Rui Nagueira's 1970 interview with the director.)

Melville's other movies about Occupation and Resistance