President Franklin Roosevelt (BIll Murray) and his companion Margaret Suckley (Laura Linney) drive along FDR's Hyde Park estate in Roger Michell's study of a royal visit with international implications and a little-known relationship between the President and a distant cousin.
Hyde Park on Hudson is a sequel of sorts to the critical and box-office success of Tom Hooper's film The King's Speech. Both movies feature King George VI (and his wife) and both are based on actual historical events and people. Both movies concern public figures who have to overcome disabilities - crippling polio in the case of President F.D. Roosevelt, a debilitating speech defect in the case of George VI. And the two movies are set in an area of rising international tensions that will result in world war. Speech focuses on the monarch's  struggles to overcome his stutter which limits his self-confidence and his effectiveness as the public representative of a crucial British institution as World War II approaches. Hyde Park also occurs against a backdrop of troubling events - a couple of months before the outbreak of that war. The events shown in Michell's movie fall within the period when George VI was being treated by the speech therapist Lionel Logue, as shown in The KIng's Speech. Hyde Park on Hudson has a double focus. It is based on two overlapping events. The first is the visit of the royal couple to the USA in 1939 - the first time a reigning British monarch had visited America. The movie focuses on the weekend that the royal couple spent as the President's guests at his private summer estate at Hyde Park, an idyllic site above the Hudson river. Intertwined with this historical strand is a semi-historical, speculative portrayal of the little-known relationship between President Roosevelt and Margaret (Daisy) Suckley (pronounced Sook-ly), a sixth cousin of FDR's, who became archivist of the Roosevelt family papers. This quiet, rather shy and naive, unprepossessing woman was a favourite companion of FDR, who liked to surround himself with adoring females. The movie claims, without any evidence, that this particular weekend was a critical moment in Suckley's perception of the 'affair'. 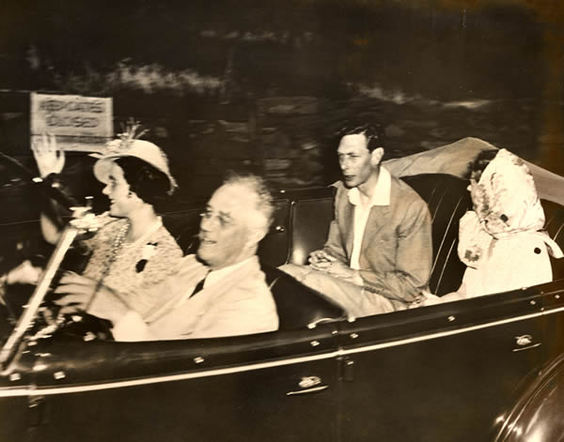 President Roosevelt drives the royal couple in his custom-built car during their visit to Hyde Park. The woman seated in back is not FDR's wife but his daughter-in-law, Daisy. How significant was it that Eleanor Roosevelt did not accompany the King and Queen?

Just how accurate is Hyde Park on Hudson? 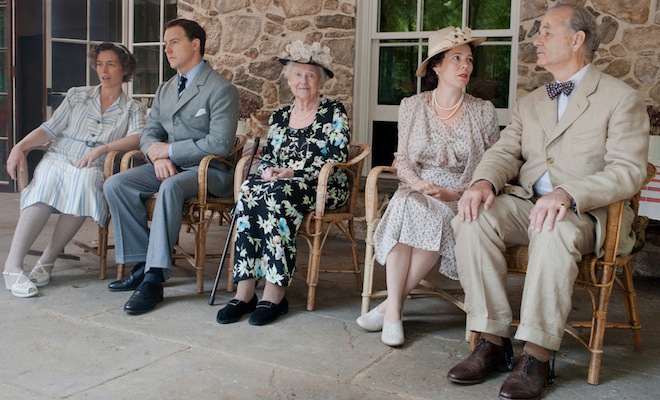 First Lady with King George VI, President's mother, Queen Elizabeth with FDR - according to the movie.

Eleanor and FDR at Hyde Park: the exact nature of their marriage will always remain uncertain.
Transcription of George VI's handwritten notes on his discussions with the President at Hyde Park 10-11 June

I had two good conversations with the President, besides many opportunities of informal talks on current matters in the car driving with him. He was very frank and friendly, & seemed genuinely glad that I had been able to pay him this visit. He gave me all the information in these notes either in answer to my questions, or he volunteered it.

Mr. Mackenzie King was present at the first conversation at Hyde Park. We talked of the firm & trusted friendship between Canada & the USA. FDR mentioned that he thought it was a waste of money to build a Canadian fleet as he had already laid his plans for the defense of the Pacific Coast of Canada, especially Vancouver Island (Assembling plants for aeroplanes in Canada). On mentioning the Neutrality Act the President gave us hopes that something could be done to make it less difficult for the USA to help us.....

....I was alone with him for the 2nd conversation. We discussed Europe in a general way. He hoped France & Italy would try & get together.

He was doing his best to get New York to loan money to Roumania. I told him how difficult it was for us to help the Balkans as there was the Mediterranean to convoy things through, & they would want all they had got in a war. I explained to him Roumania's position as to frontiers having 4 to cope with. Because of the air we were only just becoming frontier-conscious ourselves. In the whole of N. America he has none. He was definitely anti Russian. I told him so were we but if we could not have an understanding with her, Germany probably would make one.
He showed me his naval patrols in greater detail about which he is terribly keen. If he saw a U-boat he would sink her at once & wait for the consequences.
If London was bombed USA would come in. Offensive air warfare was better than defensive & he hoped we should do the same on Berlin.

FDR's ideas in case of War

Trinidad Patrol. Base for his fleet at Trinidad to fuel & replenish stores. From this base he can patrol the Atlantic with ships & aeroplanes on a radius of approximately 1000 miles on a sector of latitude of Haiti to latitude of Brazil. This patrol should locate any enemy fleet, which tried to get to S. Am. or the West Indies.
Bermuda Patrol. Base as above. To patrol N. Atlantic from Cape Cod to Florida, with ships & aeroplanes to prevent submarines from attacking convoys.
Brazil. Germans have an air base at Natal Cape St. Roques also a landing ground on the island of Fernando Noronha 200 miles from the coast. Brazil is pretty sure to kick out the Germans. He would then use it himself.
Haiti, Cuba, & West Indies are potential friendly bases.
The idea is that USA should relieve us to these responsibilities, but can it be done without a declaration of war.