Crucial to North West Frontier are the roles of a rusty old train (locomotive) engine (significantly called 'Empress of India'), better known to its Indian engineer / train driver as 'Victoria'.The train, in the loving care of its engineer Gupta, becomes the only means of escape for a group of Europeans, and a young  Hindu prince from a North West Frontier city besieged by Muslims who have overthrown the ruler.In order to reach safety 300 miles away the old engine with its one carriage must carry the refugees through rebel territory, fighting off angry tribesmen determined to stop the train and kill the prince and the passengers. The situation was the basis for Stagecoach and several other western films. But the train makes a fine substitute for a stagecoach, and the passengers contain a traitor and also display an ability with sharp repartee. Thompson's talent for pacing a film is obvious here; the buildup to planning the escape by train steadily builds up the tension. The dash to safety cleverly alternates scenes of external danger with scenes of tension between various passengers, and interesting revelations about them. 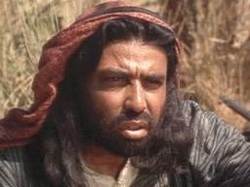 Johar in 'Lawrence of Arabia'.
The train driver, played by I.S. Johar, who became a leading figure in early Bollywood, greatly adds to the film's appeal. His determined attitude, loyalty to his beloved 'Victoria' and perky personality are a winning combination. His success in this role was a step on the way to becoming a seminal figure in the history of early Bollywood. In the early postwar years he acted in numerous Hindi films, and appeared  in some western films such as North West Frontier and Lawrence of Arabia. From the 1950s to the early 1980s he acted in dozens of Hindu and Punjabi movies. He also wrote scripts, produced and directed - many of them comedies. Johar became tremendously popular with such films, which often satirised the greed and foiblesof India's ruling and upper classes. Johar was a stalwart of early Bollywood cinema. Find out more.

The locomotive 'Empress of India' in North West Frontier 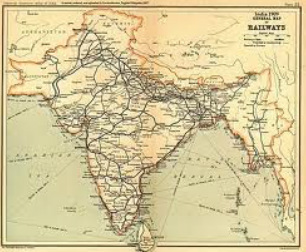 The railway network in British India, 1908.
The Indian railways -and the little locomotive 'Empress of India' - play crucial roles in North West Frontier. According to Ray Ellis's article  "Railway Films of the Raj" ,published in the Indian Railway Study Group Newletter No.9, January 1993. most of the railway sequences were filmed in Spain on the  5'6" gauge Zafra-Huelva Railway. It features  "spectacular bridges and some very Indian looking scenery". The  "Empress of India" was a tank engine, an 0-6-0T built in 1900 for the South of Spain Railway. For filming sequences on the sound stage at Pinewood Studios, full size replicas of the locomotive, rolling stock and part of the bridge were constructed".
However, Ellis notes that  several railway scenes were shot near Jaipur, India using metre gauge trains. "These include the departure of the 'refugee' train and the scenes where the 'escape' train catches up and passes the 'refugee' train."

The leading roles played by trains and the railway system in the movie accurately reflects the important contribution the railway system played in the history of British India. The rail network built by the British was one of the most valuable and significant contributions of the British Raj. For the British rulers it insured more rapid dispersal of troops around the subcontinent to quell unrest. But it also helped unite disparate regions, stimulate economic development, provide jobs and improve communications over the vast subcontinent. 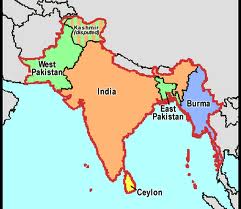 1947 -the partition of British India.
Although North West Frontier is primarily an adventure film, set in the very late 19th or early 20th century, part of its impact derives from its references to the consequences of British colonialism in India, and to the Hindu-Muslim tensions that eventually erupted into horrific violence during the end of British rule and the accompanying partition of the Indian sub-continent into India and Pakistan in 1947. Millions of refugees poured out of India and Pakistan; many used the railway system. Some of these refugee trains were ambushed by Hindu and Muslim religious fanatics.
North West Frontier  uses its earlier historical context to show this religious hatred, communal violence and the refugee problem it created.The first part of the film shows a crowd outside a fort in a scene that remarkably resembles a photo  of refugees at an old fort at Purana Kila in a 1947 Manchester Guardian article. (See below). A more disturbing reference occurs later in the film when the aftermath of a massacre of refugees on another train is depicted in some detail. This leads two characters argue about Britain's colonial responsibility. The film's British hero, Scott, says 'See what happens when the British aren't around the keep order'. The 'foreigner', Van Leyden, replies 'Keep Order? You? You divide. Set Muslim against Hindfu. You divide in order to rule....' Scott argues that 'The Muslims were fighting the Hindus for hundreds of years before we came to India'. Van Leyden looks at the corpses and asks Scott: 'You call this keeping order?'
This movie is remarkably ahead of its time in other ways. The mixed race issue  is essential to the last third of the plot, and is presented with considerable sympathy . So is the issue of Muslim attitudes towards violence as a way of achieving their goals. The morality of arms trading and its role in encouraging sectarian violence and war is also examined. Even the question of journalistic ethics is investigated. And - spoiler alert - at the end, when we expect the rescued young prince to be grateful to his British officer rescuer, he tells him that his mission, passed on by his father, is to eventually overthrow British rule.  Remarkably, this serious moral/ethical baggage enriches rather than detracts from the enjoyable action-adventure aspects of the movie. 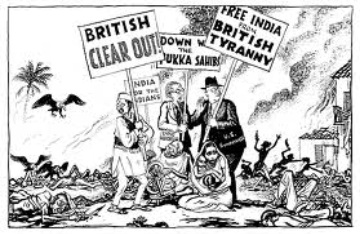 20 May, 1947 Daily Mail cartoon (cartoons.ac.uk)=ILW1248
The British colonial role in India, and its contribution to the disasters of 1947 and the subsequent tensions between Pakistan and India remains a source of contention decades later. The Scott -Van Leyden argument outlines the two basic positions. For some historians, British colonial rule not only provided the sub-continent with the benefits of modern Western life, such as railways which improved transport and facilitated famine relief. The British also tried to keep the traditionally warring Hindu and Muslim factions at bay. The British withdrawal meant disaster as communal antagonism erupted without the overlordship of the colonial power. The 1947 Daily Mail cartoon left shows this attitude.Conversely, other historians maintain that British control of such a huge area and vast population depended on a policy of divide and rule, and the manipulation of racial and religious antagonisms to divert attention from the mistakes of British rule.

Other cliomuse.com pages on movies about the British Raj