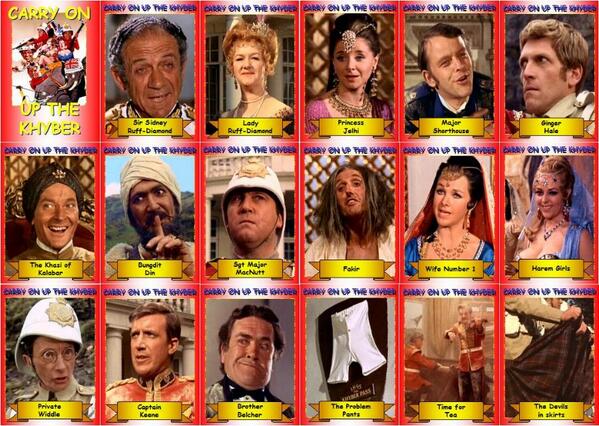 Carry On Historian: Has the Movie Any Factual Basis? 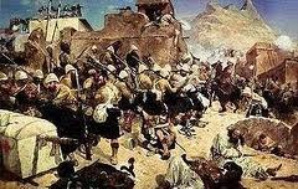 The Highlanders in action on the North West Frontier.
Although the characters in Carry On Up the Khyber are all fictional, the actual historical context that is the basis of the film is accurate.The film is set in 1895. During that year there were two major battles between British forces in Afghanistan and Pathan (Pashtan) tribesmen: the battle of Chitral and the battle of Malakand Pass. Thus same area  was the focus of conflict between Russian forces and tribesmen in the early 1980s and remains an area of contention between Taliban and US forces in the early 21st Century.
The  kilt-wearing Gordon Highlanders played a key part in the 1855 conflict,  with the regiment famously winning the India Medal  and two Victoria Crosses in the Chitral battle. In one famous incident, the Regimental Piper was shot in both legs, so he sat down and piped his troops into battle.
The tribesmen also used similar tactics to those depicted in the movie i.e. surrounding a British garrison town and trying to overrun it.  Carry On Up the Khyber shows that the rebels were deceived rather than defeated militarily. They simply went away. In history too the rebels 'lost'  but were hardly defeated. They  too returned to their mountains and resumed their campaign a couple of years later, and again the Gordons had to repel them. See Tribal Analysis Center and Heritage History. 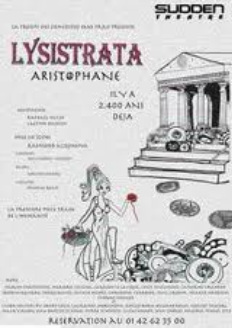 Carry On Up the Khyber and the other movies in the Carry On series is separated by two millennia from their earliest models for comedy. In the late late fifth and early fourth centuries BCE the Athenian comic dramatist wrote many comedies that established a template using some elements happily reinvigorated by the Carry On team.These included a reliance on farce, and bawdy humour, and stereotyped characters, as well as attacks on Athenian institutions, and social manners. Aristophanes, however, savagely satirised the politicians and  prominent citizens (like Socrates)  of his society, unlike Carry On movies. His most famous comedy, still staged frequently today, was Lysistrata, where a group of women, angry with their menfolk for continuing a long and bloody war,withhold their sexual favours in order to make their husbands see sense.
Carry on Up the Khyber also deals with war and the military -and the issue of empire-  but in a more genial manner. And just as Aristophanes satirised the drama of contemporary playwrights, Khyber ridicules the cliches of British war movies, such as the 'stiff upper lip' mentality and the surroundered and outnumbered outpost scenario.  Khyber also examines Britain's colonial past in northwest India in 1895, while also mocking British concerns to uphold class values and maintain dignified, restrained behaviour at all costs in front of the 'natives'. The British Governor, Sir Sidney Ruff-Diamond, has to deal with the scheming Afghani leader Rhandi Lal, the Khasi of Kalabar, who wants to overthrow British rule. He is prevented by the presence of a Highland regiment, the Third Foot and Mouth, known as the Devils in Skirts, who, according to reputation, wear no underwear under their kilts.But the truth is revealed, the tribesmen no longer fear the regiment's fearsome reputation and .....
The issues of British military presence in foreign countries, and of British military competence, are investigated by the movie with sufficient vigour for it to have be banned from being screened on British television during the first Gulf war.