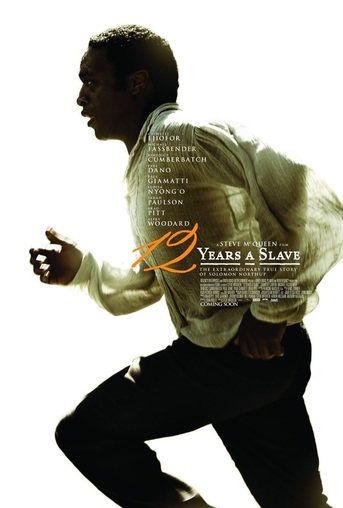 Steve McQueen's movie about American slavery follows less than a year after Tarantino's Django Unchained, and Spielberg's Lincoln, both of which provided fascinating new perspectives on aspects of that emotive topic, which has frequently provided controversy over its presentation in movies dating back to D.W. Griffith's Birth of a Nation. The McQueen movie is based on the memoirs of a free negro,Solomon Northup, who was kidnapped in 1843 and sold into slavery.
Hattie McDaniel's performance as a household slave for Scarlett O'Hara not only resulted in her becoming the first African-American to win an Oscar. Although her portrayal involved many of the stereotypes of slave women ( subservient, slow, unintelligent) McDaniel's astute acting subtly emphasised her character's loyalty, common sense and courage, establishing a contrast with several of her white 'superiors'.
The Autobiiography of Miss Jane Pitman (1974)  was a CBS made-for-TV movie, (very well directed by John Korty and featuring a fine performance from Cicely Tyson)) although it's favorable reception in the USA meant that it was released in theaters overseas. Its popular and critical success helped pave the way for the more histrionic TV series Roots, which followed three years later. The remarkable strength of Autobiography comes not only from the fine performance of Cicely Tyson as a former slave looking back as a centenarian over her life and times, but from the excellent script and direction. The movie is especially effective in the way that it highlights the de facto slavery that existed for decades after the Emancipation Proclamation. On the other hand, Richard Fleischer's Mandingo was condemned as brutal racist expoitation when released; in recent years it has been hailed as a fearless depiction of the cruelties of slavery and its pernicious impact on both black and white alike. Tarantino's Django Unchained makes explicit reference to Mandingo in crucial scenes. Although Tarantino specifically references Mandingo in his movie (it's also one of his favorite films,  neither 12 Days director or scriptwriter acknowledge the existence of Mandingo, although Fleischer's movie is an obvious thematic and cionematic influence - and one that offers an even harsher indictment of plantation slavery.

Not quite as original as its director & writer  proclaim

The director (Steve McQueen) and scriptwriter (John Ridley) of 12 Years a Slave may well have reason to be proud of their movie, but neither the movie nor the screenplay is as novel and original as the pair have proclaimed in interviews. Its originality lies in the fact that it focuses on a colored man who was originally free and was then sold into slavery. And the movie was hardly the first to provide a perspective on planttaion slavery life. Nor did the pair rescue Northup's memoir from obscurity. The book fell out of publication for some time in the mid- twentieth century, but in 1968 the text was republished in a scholarly edition which contained footnotes, notes, background information and other crucial details. Since then the memoir has been published by several firms in both paperback and hardback, made freely available on the internet, included in extract compilations and used widely in both the USA and other countries in many educational courses, especially literature, history. and racism. Indeed, by the time McQueen made his movie 12 Years a Slave was probably on of the best known and most extensively cited of all slave narratives. John Ridley's claim  that "this was a book that had disappeared, and Steve [McQueen] and his wife found it ....this is a story that has gone unknown" is nonsense. [http://news.moviefone.com/2013/10/18/12-years-a-slave-steve-mcqueen-interview/]
In fact, their 2013 movie is not the first movie to be based on Solomon Northup's slave narrative. That honor goes to a TV movie first released under the same title and favorably received by critics - and made by another person of color, the well-known photographer and Hollywood director, Gordon Parks.  Like McQeen's movie, Parks' production focuses on  the torments of Northrup's life in slavery. Neither director nor writer of the 2013 version seems to have acknowledged Parks' earlier, pioneering effort, although Ridley claims that "we found out later that that there had been an attempt by American Playhouse to mount [a production]...."

Who was Solomon Northup, the hero of 12 Years a Slave ?

Sketch of Solomon in his 'plantation slave suit', and as portrayed in the the movie ; the real Solomon's prowess with the violin was a factor in his kidmapping and subsequent enslavement.

• Born July 1808 in Minerva, New York state - date of death unknown, presumably some time after 1857
• father a freed slave, who took his former owner's surname, mother of mixed race. Parents had two sons, bot born free in New York state.
• Solomon, like his brother, was given a good education for the time
• Married to Anne Hampton, 1829, a mixed race woman. They had three children.
• For a time Northup owned a small farm; he moved his family to Saratoga Springs, and worked at a variety of jobs including playing violin at dances, inns etc, labouring and as a carpenter.
• kidnapped 1841 and sold into slavery in Washington, D.C. (where the slave pen is now the F.A.A. headquarters in Washington Mall)
• spent next 12 years as a slave in Louisiana
• freed 1853, returned home and wrote memoirs
• went on a lecture circuit recounting his experiences and  produced two unsuccessful stage productions of his ordeal.
• may well have participated in the Underground Railroad, helping figitive slaves escaoe to Canada
• sued the Washington D.C. slave traders who sold him, but unsuccessful because local law prevented a black man testifying against whites.
• mysteriously vanishes from history after c.1857, leading to rumors that he had been kidnapped again, or murdered.

12 Years a Slave and the slave narrative genre

The movie version of Solomon Northup's  account of his experiences as a slave explores several of the major themes of a special genre, known to historians and literary critics as "slave narratives". This genre had been a feature of the American and English literary landscapes  after the 1760s; it  became especially popular in the USA during the ferment over slavery in the period 1840-1860. The various depictions of slavery were used as ammunition by anti-slavery groups in both countries to condemn, first, the slave trade, and then, the institution of slavery itself. Some of these slave narratives became best-sellers in the US. The Confessions of Nat Turner, written by a black insurrectionist hanged for leading a slave uprising, was used by both critics and supporters of slavery, aas evidence for their respective cases. More than a century later the novelist William Stryon used Turner's book as the basis for his prize-winning fictional account of the uprising.
Solomon Northup's Twelve Years a Slave is one of dozens of slave narratives that were published before the Civil War began in 1861. Several of the  best are available online (free) or as books, often with valuable historical and literary background information.

Steve McQueen's movie incorporates crucial features of the slave narrative genre, most obviously in its ethos of "romantic individualism", a fashionable attitude in the first half of the nineteenth century. The figure of Solomon Northup in both his writings and in the movie, is an individual who heroically refuses to accept his condition as a slave and who violently denies the validity his owner's authority over him as a person.
More specifically. the movie encapsulates other traditional aspects of the slave narrative genre: 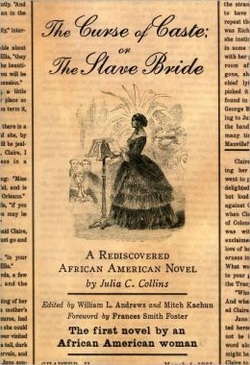 The success of the movie version of the slave narrative "12 Years a Slave" has also sparked interest in African-American fiction of the slavery era. This novel (left) is claimed to be the first novel by an African-American woman.
Some critics have suggested that Northup's autobiography is not entirely his own work. Most recently,  Michael Cieply's New York Times article [22 September, 2013) pointed out how some scholars, notably James Olney, whose 1985 essay argued that  Northup's autobiography relied heavily on the recurring conventions of the slave narrative genre (see above). Olney, as Cieply points out, maintained that the 'voice' of Solomon Northup was taken over by David Wilson, the white antislavery who acted as Northup's amanuensis - "the fine writer writer is clearly David Wilson rather than Solomon Northup." Wilson's motive was to enhance the impact of Northup's suffering and thus make the narrative even more effective in spreading the anti-slavery message amongst Americans. Today's historians accept the authenticity of Northup's account while admitting that its prose style may well have been influenced by Wilson. Research over the past quarter-century suggests that eyewitness and documentary  evidence confirms the accuracy of the information provided by Northup.  Statistical data and contemporary evidence about agricultural and plantation economies also supports the accuracy of the detailed accounts of plantation life to be found in the Northrop book. And the historian Sue Eakin's landmark 1985 edition of 12 Years is a heavily annotated and scholarly researched work that essentially confirms the validity of Northop's autobiography.