Scott (and Zelda and Scottie) Fitzgerald Go to Hollywood

The two images above mark the first and the final stages of Scott Fitzgerald's time in Hollywood as a scriptwriter.
The first image is a section from a crumpled telegram, containing a sketch of the author (and a heart) by his wife, Zelda. The telegram,was sent to Scott from the editor of Photoplay magazine in January, 1927 a year or so after the publication of The Great Gatsby.It asked him to write an "editorial" of five hundred words giving the perspective of "youth" on the 1920s. At this time, Fitzgerald was at the height of his fame, earning large amounts of money for his short stories. The telegram reached him in Hollywood, where he was working on the script for Lipstick, intended to be a movie about flappers, a category famously an flamboyantly embodied by Zelda. Ominously, the script was never completed, the movie never made.
The second image, little over a decade later, signifies the third and final stage of Fitzgerald's scriptwriting career in Hollywood. By now his literary fame had receded, his work was unfashionable and he was desperately short of  the money needed to pay for his drinking, the upkeep of his daughter and the institutionalisation of Zelda. Death was only a few months away.

Scott Fitzgerald and the movies 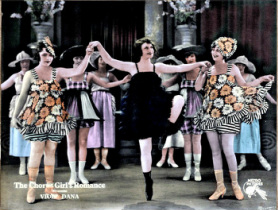 "Chorus Girl's Romance" - based on a Fitzgerald story.
"I hate the place [Hollywood] like poison with a sincere hatred," Fitzgerald wrote to his agent in 1935. Since the resurrection of Fitzgerald's literary reputation over the last two or three decades, his relationship with Hollywood has usually been depicted as that of a tormented literary genius, needing money and so forced to waste his talents writing screenplays in a city he despised for a bunch of philistines  who were incapable of recognising his remarkable talents. This failure to acknowledge his gifts, according to this scenario, helped destroy this sensitive icon of 20th Century American literature.
Fitzgerald himself occasionally promoted this myth of an author whose talents were unappreciated by the cynical, uncouth, money-grabbing Hollywood studio producers. In 1936 he wrote that movies were a "mechanical and communal art that ... was capable of reflecting only the tritest thought, the most obvious emotion ... an art in which words were subordinate to images, where persopnality was worn down to the inevitable low gear of collaboration..... There was a ranking indignity, that to me had become almost an obsession, in seeing the power of the written word subordinated to another power, a more glittering, a grosser power...." He claimed that his three spells in Hollywood had ended in failure because he could not accept the necessity of collaboration over scripts and that, unlike his fellow scriptwriters, he was not a hack and would not turn out scripts to order.
When Fitzgerald died in 1940 he left the unfinished manuscript of a novel about Hollywood, The Love of the Last Tycoon, whose main character Monroe Stahr was based on MGM's remarkable executive Irving Thalberg. The novel has usually been published under the title The Last Tycoon; although unfinished, it shows Fitzgerald at his best, partly because he had at last overcome his self-conscious, mannered, cloying style that mars most of his work.
In 1976 director Elia Kazan made an interesting but not entirely successful movie - his last one. Its script was by Harold Pinter and it starred Robert De Niro in one of his best, most restrained and sympathetic performances. Tony Curtis, Donald Pleasance and Robert Mitchum were also very good, overshadowing Jack Nicholson who seemed out of his depth.
THE GREAT GATSBY ON THE BIG SCREEN