In 1944 Hitler ordered Paris to be destroyed when Allied forces approached the city. On 23 August, Hitler declared that 'the city must not fall into the enemy's hand exce[t lying in complete debris.'  By the next day the city's vital bridges and its key monuments and buildings such as the Louvre and Notre Dame had been prepared for destruction.  But General von Choltitz, his newly-appointed Governor of Paris, disobeyed his orders. On 25 August he ordered his  forces to surrender and never carried out Hitler's command.
The controversy over von Choltitz' role in saving Paris from destruction in  late August, 1944  has been examined in Rene Clement's unfairly maligned movie Is Paris Burning?  Several decades later the German director Volker Schlondorff takes another look at the issue in his adaptation of Cyril Gely's play Diplomatie. Clément's film follows its source (the non-fiction best-seller Is Paris Burning? ) by attributing von Choltitz' eventual refusal to  carry out Hitler's order to the general's shrewd if cynical judgement that with the Allies on the verge of victory, he would do well to build up goodwill with them. The movie has some brief and  unconvincing scenes with  von Choltitz negotiating Paris's futurewith the Swedish Consul, Raoul Nordling (Orson Welles in a lazy performance).
However, Diplomacy / Diplomatie, like Gely's play, focuses entirely on the Nordling-- von Choltitz  negotiations, omitting the vital discussions with the Resistance, and argues that Nordling gradually convinced von Vholtitz to disobey Hitler and therby save Paris. Similarly, the movie follows the play's dramatic device of  focusing on one night's intense discussion and negotiation between von Choltitz and Nordling at the general's  elegant headquarters on the top floor of Paris's luxurious  Hotel Meurice. In fact, discussions occupied several days andinvolved other people, especially representatives of the French Resistance. But the movie's compression of events, and restriction of  the negotiations to just two participants, has considerable impact and adds tension. The argument of  Schlondorff's movie owes something to the insistence of descendants and supporters of von Choltitz that the general was a heroic figure who courageously defied Hitler at great risk. (www.choltiz.de)  According to their website he was 'The general who saved Paris', and 'a general with a lot of courage.'[www.choltitz.de]
The elegant Hotel Meurice is located on the Rue de Rivoli, just across from the Tuileres gardens.  It has been one of Paris's top hotel since 1835, and  its celebrity guests included Queen Victoria, Picasso. (who had one of wedding dinners there), President F.D. Roosevelt, the Duke and Duchess of Windsor, Tchaikovsky  and King Alphonse XIII of Spain (who brought his own furniture).  During the Occupation, It was used by the German  forces as their Paris headquarters: as von Choltitz's  Military Governor suite had  magnificent views of the Seine, the gardens and the Eiffel Tower.
﻿Diplomacy /Diplomacie:  portrayal of von Choltitz
Schlondorff'e movie uses considerable dramatic licence to present von Choltitz's eventual decision to disobey Hitler's order as the outcome of a duel between the the shrewd diplomat Nordling and the stern professional and ruthlerss  Prussian soldier sworn to obey his commander-in-chief. In the movie Nordling charms, wheedles, and conives  as he seeks to persuade ther general that surrendering Paris peacefully is the moral, civilized action that will win him the respect and admiration of future generations. The conflict is between two opposing viewpoints. The general's outlook is based on his family military traditions of obedience to superiors and  loyalty to one's word. Nordling's argument emphasises the moral and cultural necessity of preserving a magnificent city and its irreplaceable heritage. Nordling's arguments also include appeals to von Choltitz' self-interest. The general has already been implicated in several outrages carried out under his command, such as the massacres of Jewish civilians on the Russian front, war crimes during the destruction of Rotterdam in 1941 and very recently, the torture and  execution of Parisian Resistance members and hostages. With Germany obviously heading for defeat, von Cholditz urgently needed to built up credit with the Allies. Destroying Paris will definitely not be good for him and his family. But saving Paris would undoubtedly ensure a more lenient treatment postwar. This in fact was exactly what happened -the general was released from Allied custody in 1947.
His comments after the war are significantly ambiguous: 'I was a soldier, not a criminal, and if I thought that destroying Paris would help Germany win the war, I would have done so without a second's hesitation. But I knew the war was lost, and I did not want to go down in History as the man who destroyed such beauty."  He also maintained that 'if for the first time I had disobeyed it was because I knew that Hitler was insane.'
Despite the attempts to paint von Choltitz as Paris's saviour,some  Paris Resistance figures such as Maurice Kriegel-Valrimont insist that the general kept on killing and destroying until it was no longer expedient for him to do so. He believed Choltitz was motivated by self-preservation, not a noble desire to preserve the city.
Pierre Taittinger, the Vichy [collaborationist] head of the Paris Municipal Council, claimed credit for negotiating a deal, a claim not given much credit by modrn historians .However, a crucial role was played by three supporters of General de Gaulle - Roland Pré, Jacques Chaban-Delmas and Léo Hamon - who used Nordling as an intermediary to negotiate with  Choltitz over terms of a ceasefire and surrender. 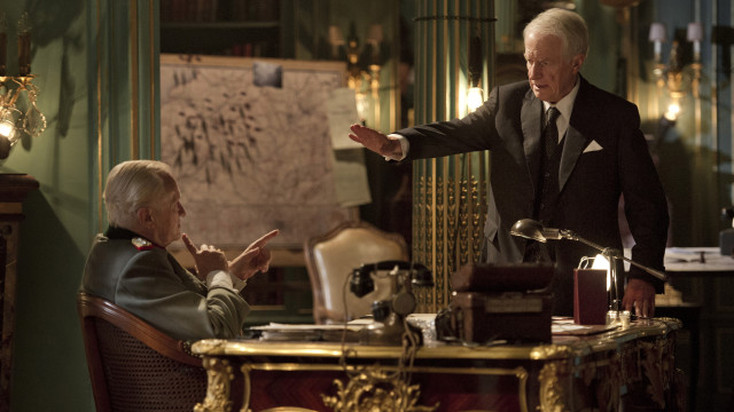 The battle of wits between the general and the diplomat that is the heart of the movie.
The most recent and most reliable account,Randall Hansen's Disobeying Hitler: German Resistance After Valkyrie (OUP) uses archival records in three languages to present a detailed and essentially positive view of Choltitz' role. Hansen shows how  Chiltitz lied to  Berlin about what exactly was going on in Paris, deceiving Hitler's high command into believing that Paris was a blood-soaked battleground in flames and its bridges destroyed. He shows that Choltitz made no effort to take measures that would have implemented Hitler's order to destroy Paris. He also makes a crucial point: that Choltitz' actions were approved by his officer corps, who had supported the failed Stauffenburg attempted coup against Hitler on 20 July. [Hansen, pp.114-115]
Interestingly, Choltitz' surrender of his forces involved elements of theatrical contrivance. He wanted a token struggle  to demonstrate he had not meekly surrendered. So Free French forces moved tanks and infantry down the Rue de Rivoli towards the Hotel Meurice. Upstairs, one of the German staff officers told Choltiz  'Sie Kommen, herr general (They're here.)' The general and his officers placed their pistols on the large table. Outside the hotel entrance there was a brief exchange of gunfire and grenades. Then Choltitz formally surrendered and he and his officers were escorted outside where an outraged Parisian  shot to death one of the Germans. Choltitz wasrushed away to complete the formal capitulation.[Hansen, p.115]] 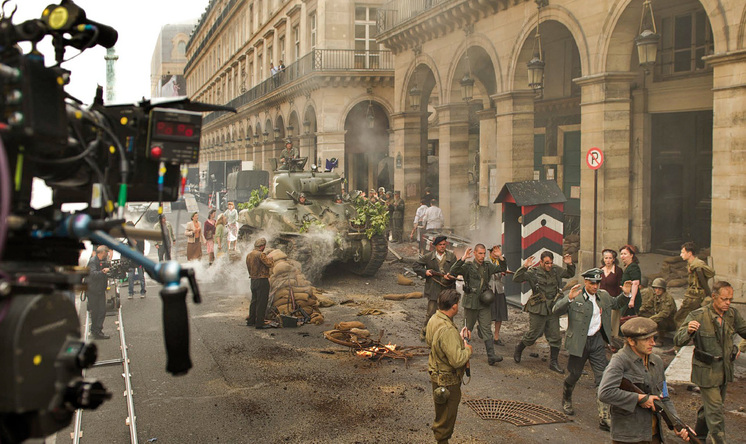 Shooting a scene supposedly outside the Hotel Meurice