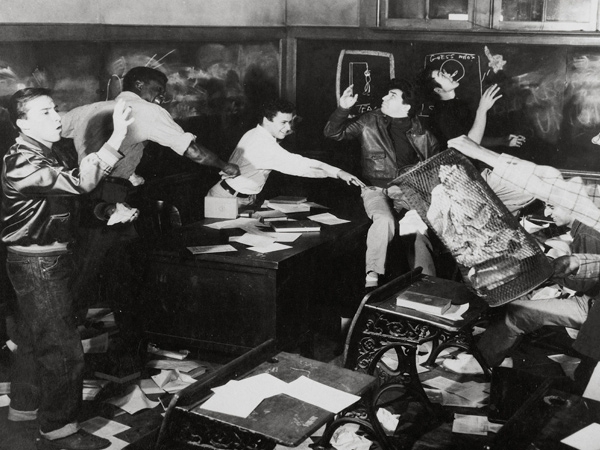 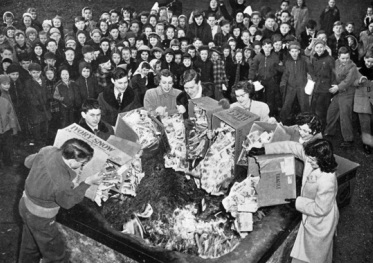 Burning comic books, Binghamton,N.Y.,1948.
Blackboard Jungle exemplifies two major, interwoven concerns of post-1945 American society: fears about the behaviour of children, especially adolescents, and anxiety that so-called juvenile delinquency was caused and encouraged by the popular media, especially comics, movies and music. These concerns were not confined to the USA, but featured in most western countries . Blackboard Jungle was regarded as highlighting issues of teenage (mis)behaviour in cinematic form. It was also accused of fostering juvenile delinquency by providing teenagers with examples on screen for gullible youngsters, especially boys,to copy.
The paranoia over popular media and its presumed dangerous effects on the young reached its height in America.The rising number of teenagers in the population and their increased spending power made them a profitable niche market for comics, teenage movies and music.Comics, accused of inciting godlessness, violence, pre-marital sex and disrespect for authority were a favourite target of politicians, 'experts' in educational and psychology, and child-saver groups. Some blamed Russian communism for trying to poison the minds of American youth. Others blamed unscrupulous businessmen making quick bucks by feeding corrupting media  filth to innocent young minds. During the 1950s some church, civic and school communities in America held bonfires in which suspect comics or records were burned. Some communities tried to ban the movie, as did some educational groups.

Blackboard Jungle owes a lot to City Across the RIver 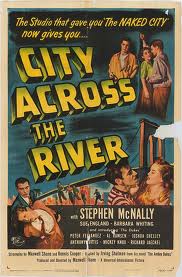 If the 1949 movie The City Across the River is remembered at all today, it is for kick-starting the career of Tony Curtis. Yet Blackboard Jungle owes a lot to the earlier film, directed by the little-known Maxwell Shane. City looks at juvenile delinquency in a rundown area of New York city; education is an important motif ; a crucial scene take place in a classroom where teenagers intimidate the teacher. Both films strive for authenticity. Although Maxwell Shane's movie does not spend as much time in the school environment as does Brooks' later effort, the 1949 movie has a rather more incisive and tragic commentary on education and delinquency. Nicholas Ray's Rebel Without a Cause is also indebted to City Across the River in its focus on the relationship between family dynamics and youthful delinquency, although the earlier film is  more convincing because its  hero is struggling to escape from a disadvantaged socio-economic background and Rebel's hero is a spoiled youth from a privileged home.
See Cliomuse.com on City Across the River.

The movie introduced  rock 'n' roll to a wider world, making Rock Around the Clock  a huge hit

Blackboard Jungle is famous for making millions of moviegoers aware of a new form of music - rock 'n' roll. It wasn't the first rock 'n' roll record to become an American hit, and when it was first released released in 1954,  Rock Around the Clock was only the B side to the Comets' recording of a now forgotten song called  Thirteen Women (And Only One Man in Town). This song in turn was based on a Hank Williams number,Move It on Over. In May that year the ten-year old  Richard Ford, (son of Blackboard Jungle's star Glenn Ford and Eleanor Powell, a leading dancer in Hollywood musicals of the time), bought Thirteen Women and didn't like it. He played the flip side and immediately loved Rock Around the Clock. The young Ford followed his  parents' keen interest in music: their huge record collections covered everything from classics to blues. Richard Ford's special interest was rhythm and blues - 'race' music as it was then called. One evening the movie's director Richard Brooks went to the Ford home and heard the record. He borrowed it and decided it would be ideal to play over the opening credits and at the end. The young Brooks attended a preview of the film in 1955. "...I remember very clearly my thoughts as the first scene opened on the empty blackboard as the credits rolled by: Wow! Not only were they playing  'Rock Around the Clock', the song that Dad had borrowed from my record collection and given to Mr Brooks, but it was so loud  - just like I played it at home. It was wonderful!" (Peter Ford, Rock Around the Clock and Me.)
The same month that Rock Around the Clock was released, the U.S. Supreme Court issued its landmark decision Brown V Board of Education. THis famously declared racial segregation to be illegal. Not only did the Brown Case spark of years of political, social  and legal controversy - especially in the South - it was also crucially significant in the American cultural sphere. For it now brought to the forefront of American life the role of African-Americans in that society, and for many white  Americans popular music was the most visible evidence of the increasing significance of that role.

These stills from Blackboard Jungle exemplify one of the movie's great virtues: it'd realistic depiction of what an ordinary classroom looked like in the postwar years - and still looks like in many schools today.Brooks insisted on giving the film a realistic, almost documentary look. He insisted that it be filmed in black and white and that most of the students be cast by unknowns. He wanted the school buildings to have the dilapidated and tired appearance of the school that he taught in. Furthermore, the school is what used to be called a 'Manual Training School', teaching Trades, that least glamorous of subjects to an essentially working class student body. The classroom, the focus of many of the movie's key scenes, is drab and crowded. Unlike most Hollywood films set in schools, the class numbers more than a handful of students. And most of them hate school and don't want to learn. Most other movies about schools and teachers - the terrible Dangerous Minds and  Freedom Writers, for example - feature large, well-lit classrooms with good furniture and students who with amazing rapidity overcome their initial arrogant attitudes to end as worshippers of their saintly teacher.
Other features of Blackboard Jungle also provide realistic touches. Many of the teachers themselves have given up on their students and lack initiative and dedication. Some are simply scared of those they teach. The school's principal prefers to ignore the obvious failings of his school, and does not support his staff. There is racial conflict between students and an ingrained culture of violence.The film's hero is rather self-righteous and fails to provide emotional support for his wife.

Brook's film takes an interesting look at racism in America. Hollywood had a disgraceful record in using African-Amercans in movies. Originally most 'negroes' were portrayed by white actors in black-face.When African-American actors were used, for decades they were usually cast in degrading roles: brutish villains, fawning servants, illiterate but cheerful musicians. After World War II the situation slowly improved as a few directors cast African-Americans in meaningful roles, portraying characters of intelligence, dignity and resource. Some movies examined the issue of racial prejudice with some commercial success e.g.Elia Kazan's  Pinky (1945). So did No Way Out (1950) which included Poitier. Another 1950 film, Storm Warning, attacked the Ku Klux Klan.Two years before Blackboard Jungle Fred Zinnemann, a major director made a major movie Member of the Wedding, the first Hollywood movie to give an African-American actor (Esther Waters)  a major starring role.
In Blackboard Jungle Poitier portrayed an African-American who was  not a thug or a figure of fun. His character,Miller, is an intelligent and thoughtful youth, made bitter and uncertain by the racism that he sees around him, especially in the education system. At first he joins his class in tormenting Dadier, the idealistic teacher portrayed by Glenn Ford. Dadier tries to overcome Miller's resentment by outlining the careers of Joe Louis the boxer and Ralph Bunche the diplomat as good role models to emulate. At the movie's climax Miller joins forces with Dadier against the thugs in the class.

This movie started a cycle of Hollywood films about delinquent teenagers

Encouraged by the success of Blackboard Jungle, and the previous year's  The Wild One, Hollywood set about making films which appealed to (a) adults concerned about delinquency and (b) teenage audiences supposedly drawn by scenes of delinquency in action and usually featuring the actor equivalents of Paris Hilton One of the more  adult movies has become a classic: Rebel Without a Cause, directed by Nicholas Ray, and screened  in the same year as Blackboard Jungle.  Whereas Jungle  set the delinquency issue firmly within a working-class, inner-city context, Rebel looks at it from the viewpoint of prosperous middle-class suburbia. Parental failure is blamed for delinquency, as well as the erosion of paternal authority by wives and mothers. Again, this movie, like Blackboard Jungle, had wide appeal. Teenagers admired Deans (and Natalie Wood); parents could fret over how they should deal with their rebelliousl teenage offspring. However, there's an aura of self-pity and a sense of entitlement and victimhood about the Dean character that ultimately becomes repetitious and unconvincing.
Few movies about teenagers and delinquency  were as thought-provoking or well-made as either Rebel Without a Cause or Blackboard Jungle. Most of them were sensationalist, aimed at a niche youthful audience including those having dates at drive-ins. The quickly-made, poorly-acted and unevenly photographed and directed films were watched, or not, by audiences more interested in their dates than in the movies on display.
The posters for such films promise a lurid and violent content, with cars, fights,  curvaceous girls and angry youths. What their audience actually saw was usually much tamer and more conventional, with the wicked suffering at the end and the good guys and girls reforming their ways.
An overlooked but significant aspect of such movies is that a surprisingly large number of them feature young women as leading figures. Some of them are dominant characters: leaders, instigators, strong-willed, aggressive. They are far from being demure. Instead, these women are sexually assertive, and dismissive of accepted social norms for females. In many ways they act like disaffected young males: angry, defiant, reckless. In the final reel, of course, the majority have either paid for such effrontery by death, injury, or incarceration, or have been persuaded to forgo their wild ways. Yet such films constitute an early example of the wave of assertive feminism usually associated with the sixties and seventies.

See for yourself: scenes from Blackboard Jungle