Where history and movies meet

El Cid (1961) Dir: Anthony Mann
"One of the greatest epic films ever made" - Martin Scorsese 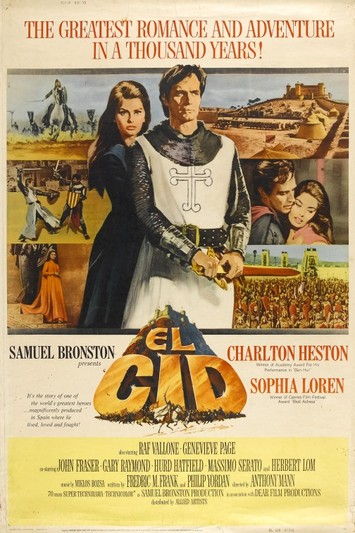 El Cid - What is the movie's claim to fame?

In brief, Martin Scorsese (as usual) had it right. El Cid  is indeed "one of the greatest epic films ever made." Only a handful of movies - Lawrence of Arabia , Spartacus, Dr. Zhivago and 1900, along with Alexander Nevsky and Ivan the Terrible  and Gone With the Wind  - can match it for sheer spectacle. While it lacks the intellectual heft of some of these historical epics, and is burdened with some wooden acting and an occasionally  ponderous script, El Cid makes outstanding use of the emotional resonance of the traditional mythical themes of heroism, chivalry and sacrifice. Made decades before the arrival of CGI, the movie's great set-pieces have an authenticity and power lacking in modern cinema's computerised special effects. Furthermore, El Cid was directed by one of Hollywood's greatest, and most under-valued talents, Anthony Mann, best known for his remarkable film-noirs and westerns.  As Scorsese said, "Anthony Mann's sense of composition, his use of space, and his graceful camera movements bring to life an ancient tapestry where the transformation of an ordinary man into a legend become almost a mystical experience."

El Cid was made years before the advent of the personal computer, let alone CGI. So the spectacular images and sequences that you see onscreen are not the technological byproduct of computer wizardry - the massed armies colliding in violent battle consist of real people, horses and reconstructed lifesize instruments of war fighting against genuine medieval castles. Significantly, these scenes were filmed by a director with a genius for portraying armed conflict and violence, alongside a master cinematographer (Robert Krasker). And the second-unit director was none other than Yakima Canutt, famous for his work on action classics ranging from Stagecoach to Ben-Hur.
The magnificence of the location settings with their armies moving across screen and enormous crowds (above left)  were matched by the elegance  of the interiors with their enormous sets and  3-D like perspectives (centre). The romantic scenes  (above right) on the other hand were not helped by the lack of chemistry between the two stars who detested each other. 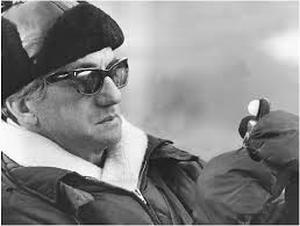 Robert Krasker
Robert Krasker was director of photography on at least  fifty films in his career. Born in Perth, Australia, he studied photography in Paris and Dresden in the late 1920s ,and was  greatly influenced by German expressionism. In 1931 He then moved to England where he became a camera operator at London Films, working for Alexander Korda. In 1943 he worked as cinematopgrapher for Leslie Howard's final movie, The Gentle Sex. Impressed by his work, Laurence Olivier appointed him to lens his famous cinematic version of Henry V. In 1945 he shot Brief Encounter for David Lean. Two years later he was cinematographer on the first of several films he made with Carol Reed: Odd Man Out. His next film with Reed, The Third Man, with its skewed camera angles and deep shadows, won him an  Oscar. It remains one of the most frequently praised exemplars of the cinematographer's art. For the rest of his career Krasker worked in a variety of movie genres and styles, ranging from epic (Alexander the Great) to Visconti's romantic melodrama Senso to Billy Budd.

"The Third Man" - this famous scene reveals the sense of depth, shadows and light that create an ominous atmosphere and the use of arches and walls to frame a character or feature. Note below how Krasker similarly uses shadow and light (this time enhanced by colour) plus windows and arches in this scene from "El Cid".

The El Cid of the movie (Sayyid was medieval Arabic for the honorary title of 'Lord') is an idealized portrayal of a real person, Rodrigo Diaz, a warrior-knight from the kingdom of Castile in Spain, who lived from 1043 to 1099. The film quite deliberately sets out to depict him as a semi-mythical hero of Spain, the man who liberated "Spain" (a nation which didn't actually exist at the time)  from the Moors who had invaded the Iberian peninsula in 711 as part of a Muslim army of conquest and overcame the Visigoths who previously ruled there.  And in fact this is how he appears in the folk tales, ballads, plays and above all the  great work of medieval literature,  the epic poem The Song of My Cid [El Cantar de Myo Çid]. The latter was composed anonymously in the Castilian language,  sometime between 1195 and 1207.
The movie, like the poem,  depicts El Cid as a man of honor and courage, determined to restore the honor of his besmirched reputation.
For centuries most of the peninsula, including modern Portugal, was under Muslim / Moorish control. Several of the cities they controlled became famous for their wealth, architectural magnificence,  culture and science: Seville, Granada, Toledo. But most significant was the southern capital, Cordoba, which during the ninth century was the largest, most elegant , cultured and sophisticated city in all of Europe. It had almost half a million inhabitants, 70 libraries housing invaluable collections of literature and scientific,  mathematical and historical  manuscripts. Its streets were paved and lit at night, and public sqaures contained fountains and gardens. But gradually Moorish control of the Spanish peninsula receded as several Christian kingdoms in the north slowly expanded and gradually replaced Moorish rule in the south. This process, the Reconquista, continued until Cordoba fell in 1236 and the final city, Granada, was captured in 1492. Myths, songs and the movie incorrectly place El Cid as a hero of the Reconquista.
One of the fascinating aspects of the movie is its depiction of a fanatical fundamentalist jihadist Muslim leader, Ibn Bin Yusuf,  a real life historical figure, and a rather chilling precursor of Osama bin Laden. This is of course three decades before bin Ladin and his ideas became known to the western world. Yusuf was an important figure in the eleventh century Muslim invasion of the Spanish peninsula. He led the Almovarids, a nomadic  Berber warrior tribe who overran North Africa with the aim of restoring what they considered to be proper, strict Islamic practices.Then the Almovardis moved across to Europe, and carved out a Muslim kingdom in southern Spain. Here, as elsewhere, they despised the achievements of Islamic culture and science as effete, and overturned Muslim tolerance of other religions and their customs. Theirs was a harsh and puritanical religion.
BELOW: MOVIE'S OPENING SCENE, WITH YUSUF DEMANDING JIHAD [ENGLISH DIALOGUE]
The three medieval images above show the important role of Islamic culture in the Spanish peninsula and western Europe. Left shows a Christian European and a Muslim playing chess (a game introduced to Europe by Muslims.  Centre shows a page of an Arabic treatise on algebra  by the 12th century mathematician Muhammed ben Musa; Picture on right shows the famed Arab physician Al Razi treating a patient.

The movie's  El Cid and the real El Cid

The version of El Cid portrayed in Anthony Mann's movie is not exactly historically accurate, but it was not intended to be. It is modelled on the depiction of the man given in what was essentially a work of fiction: the medieval epic poem Song of My Cid. This famous poem reveals a semi-mythical medieval hero, the very model of the  chivalric knight; it's not an accurate  historical biography. The movie admirably captures the tone and sweep of the poem, and emphasizes the grandeur and charisma of the warrior as national hero.
The movie's historical consultant was Ramón Menéndez Pidal who was at that time a famous historian and author of the what was then the standard biography of the hero. But Pidal relied heavily on Song of My Cid. Recent historians' accounts of the era and the person take a rather more realistic   approach, emphasising that he was essentially a mercenary warrior, perhaps rather more humane and perceptive than most of his era. During his lifetime many important and powerful Christian leaders shared his tolerance of Moorish / Muslim customs, culture and scientific achievements; some even admired them.

The splendor and glory of epic movie-making : Anthony Mann's masterpiece

Anthony Mann at work on set and location with the two stars of El Cid
Mann made his name as a director in the late 1940s, with his taut, low-budget thrillers and film-noirs. Already his films showed a fascination with the themes of betrayal, revenge and redemption. In the 1950s he made a sereies of outstanding westerns, which maintained his interest with these themes, and also developed his interest in psychologically scarred heroes. Resurrection also became a major element. Mann increasingly used a background of wild or inhospitable terrain to highlight his characters' motivations and dilemmas, and to stage scenes of violent and carefully choreographed action.
So the movie's producer, the ambitious, extravagant, Samuel Bronston, made a shrewd choice in selecting Mann to direct his epic. A year or so earlier Mann had been sacked after a few days of directing producer Kirk Douglas's epic  Spartacus. His replacement, Stanley Kubrick, had turned in a remarkably fine epic movie. Now was Mann's chance to prove that he was indeed capable of making a great epic. 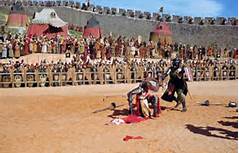 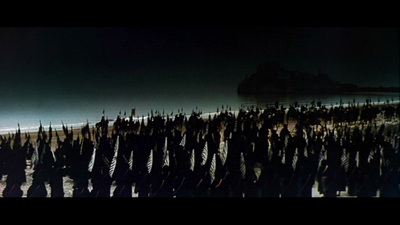 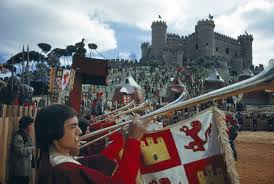 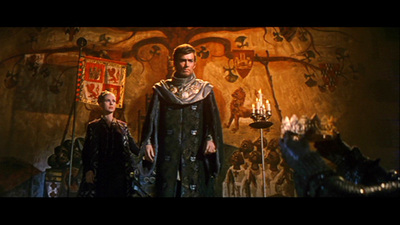 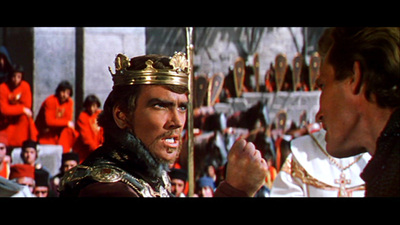