The real royal couple and their cinematic counterparts 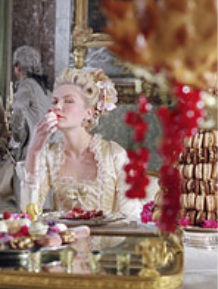 The author Caroline Weber's book Queen of Fashion: What Marie Antoinette Wore to the Revolution, and Anne Hollander's excellent article about it in Slate magazine, reveal fascinating insights into the significance of the Queen's obsession with fashions. Hollander explains Weber's idea that Marie Antoinette "took up pointed, disturbing fashions to give herself a visible autonomy and personal force that tradition didn't provide". Arriving at Court as a young teenager, removed from her family, in a strange country, she was -and remained - "politically ignorant and inept".So "Marie Antoinette may well have thought that her personal style was all she could manipulate". Her intelligent and observant brother Joseph tried vainly to warn his sister.  He noted, the historian Simon Schama writes, that she "wanted  the privileges and indulgences of monarchy while being free to pretend  that she was really a private individual." [Simon Schama, Citizens a chronicle of the French revolution New York, 1989, p.213] This of course encapsulated Diana's own attitude. But she was the wife of a royal heir lacking any political power and few significant responsibilities  in contrast to Marie Antoinette, a Queen married to a King with immense power and responsibilities
As both Weber and Hollander make clear, the young Queen's rejection of the courtly fashions of the day and her innovations of dress and style, such as "poufs", metre-high piles of hair replete with jewels and other valuables,  ultimately earned her the court's disfavour and the scorn of ordinary people. "Her expensive modern glamour was enhancing only herself, not the monarchy" writes Hollander. She ignored her mother Maria Theresa's warning: "A Queen can only degrade herself by this sort of extravagance ion difficult times." The Queen mistook the flattery of imitation by her fellow aristocrats at Versailles  for respect and approval. Her ill-advised love affairs were unexceptional by the standards of the court, but they provided further ammunition for her many critics. Ironically, the greatest scandal the Queen was associated with - the "Affair of the Diamond  Necklace", an event involving an enormous and ruinously expensive necklace originally designed for the former  King Louis XV's mistress Madame du Barry -  was not Marie-Antoinette's fault.

The Movie's Portrayal of Court Life

Recent scholarship has basically confirmed that the  VersaIles court under Marie and her husband was a majpr factor in severly weakening the prestige and power of the French monarchy.  On a personal level, hostorians have passed scathing judgements on both King and Queen. Thus Prof. T.C.W. Blanning's assessment of Marie Antoinette: "headstrong, fun-loving, self-centred and stupid." He is especially critical of her behaviour at Court. "By gathering around her a favoured few, by exploiting her hold of  her husband to make and unmake appointments, and indulging in reckless extravagance, she provided the gossip-makers with an embarras de riches." It was therefore easy for contemporary pamphleteers, the equivalent of today's tweets and Facebook pages, to portray her as L'Autrichienne en goguettes -'the Austrian bitch on the spree'. T.C.W.Blanning, The French Revolution Class War or Culture Clash?, [2nd ed. New York 1998]pp.36-37

Contemporary Depictions of Court Life - Do They Support the Movie's View?

The Contrast: the dwellings, food and entertainment of the poor

When two ways of life collide

Other movies about Marie Antoinette and her court at Versailles: