HOLLYWOOD AND ANTI-AMERICANISM IN A SMALL COUNTRY:
AMERICAN MOVIES AND THEIR SIGNIFICANCE IN NEW ZEALAND
​1916 -1956

These two scenes are from two seminal American movies of the early 1950s, both starring Marlon Brando at the height of his powers: The Wild One and On the Waterfront. The Wild One was banned by the censor Gordon Mirams and condemned  by most New Zealand's cultural guardians as violent, crude,  immoral and a dangerous example to the nation's youth. For them it typified  the features these protectors  of  morals, manners and 'high' cultural  values deplored in Hollywood movies.
For decades, this  negative view of American movies had prevailed amongst New Zealand's powerful cultural guardians, whose ranks ranged from film censors, government ministers, and the educational and religious establishments to the cultural intelligentsia and public intellectuals. These critics came from both the right and left of the political spectrum.
But significantly the censor's decision to ban The Wild One met with criticism from many, including members of the general public, some politicians, newspapers and some intellectuals. A year later, MIrams passed Brando's On the Waterfront for showing to age restricted audiences.  The movie was hailed by a new wave of New Zealand movie critics  for its  cinematic art, intensity and moral insights, and as an example of the merits of  Hollywood movies 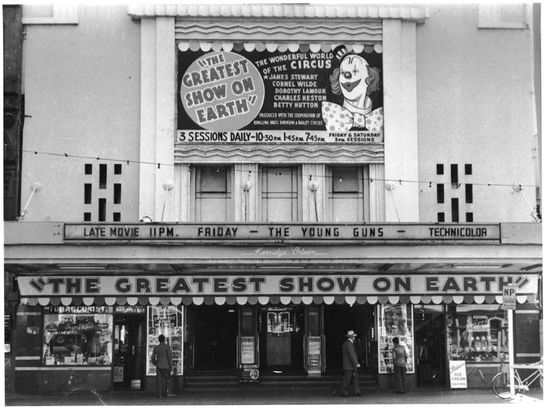 Tivoli Cinema, Christchurch, early 1950s. Before the arrival of television in the 1960s, central Christchurch had ten cinemas with others located int the suburbs.
From the first world war to the early 1960s movie-going was a central feature of New Zealand's cultural and social scene. The small country had more cinemas per head than any other nation, and its attendance rates were in the same league as those of Britain and the USA. Even small rural towns showed movies on improvised screens in small halls while some big city cinemas were modelled after the latest cinema theatre architecture of the USA. These movie theatres and the films they showed were to be remembered with nostalgic affection by the audiences, especially children, who enthusiastically watched Walt Disney favorites, popular stars, such as the Marx Brothers, Charlie Chaplin, Norma Shearer, Douglas Fairbanks Jr, Errol Flynn, John Wayne and cartoon characters, including Bugs Bunny and Woody Woodpecker.

The Controversy Over American Movies

Despite, and probably because of their great  popularity amongst New Zealanders during that era,  Hollywood movies  became  the focus of concerns about the nation's emerging national identity.  For decades American films were the bete noir of New Zealand's cultural guardians. Mandarins (both left and right) from the intellectual, political, educational and  religious elites insisted that American movies threatened to overthrow the nation's "Britishness", corrupt its youth and corrode social and moral values. Hollywood was  maligned as the subversive and malignant stalking horse of American capitalism, subtly preparing the way for an economic and cultural takeover of New Zealand.
The campaigns  against American movies were led not only by key figures with  influential roles in education, government ,  and the churches. Public intellectuals. These cultural and moral  guardians  justified their attacks on American cinema  by constructing  a condescending and misleading  stereotype of New Zealand movie audiences: gullible, passivel, childlike, needing  guidance, protection and direction by their intellectual and/or social betters. Their attitudes towards Hollywood movies also reveal not only intellectual and social condescension, but also contain significant elements of racism and anti-semitism. AS early as 1918 Dr. Truby King,  an internationally renowned expert on infant and child care,  claimed movies and cinemas were sources of laziness, dissipation and immorality for young New Zealanders.
The American 'Invasion' 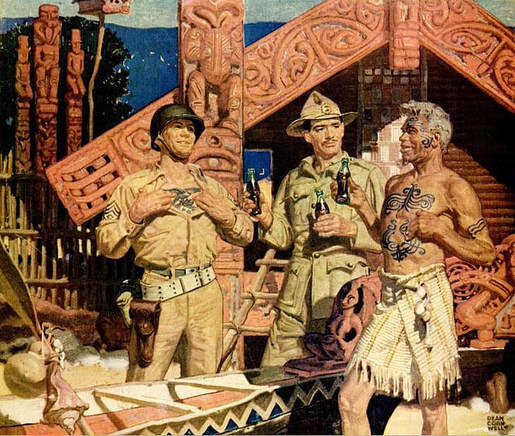 The spread of American cultural icons such as Coca-Cola (exemplified by this Coke ad) was enhanced by the arrival of U.S. troops in New Zealand in 1942. The trend was repeated in Australia, Britain and France. Such appropriation of American culture was soon to be condemned as'Coca-Colonization.'.
But in the decade after 1945 this orthodoxy was increasingly challenged by a younger generation of  intellectuals and critics. ​
Popular movies - especially American movies - became the target of  controversy  during the first half of the twentieth century in the face of attacks by many of  New Zealand's cultural guardians and public intellectuals during the first half of the twentieth century.
In 1942 the first contingent of several thousand American troops arrived in New Zealand in response to post-Pearl Harbor Japanese expansion in the south Pacific and south-east Asia. The ignominious collapse of the British military presence in Malaya and Singapore in the face of the Japanese onslaught meant that within a few months New Zealand had to abandon its traditional shortsighted reliance on Britain for protection and instead turn to the USA. The physical and strategic  presence of American military power manifested  the increasing influence of American cultural power from the beginning of the century, notably in the forms of movies, music (especially jazz)  and comics and pulp fiction.  For the overwhelmingly Anglophile and elitist majority in New Zealand's cultural establishment this was an intolerable situation.
Accordingly, after 1945, advocates of 'high' culture along with those on the political left campaigned vigorously against the American cultural invasion, exemplified by its three principal vectors:Hollywood movies, popular music and comics / pulp fiction.The attack on Hollywood was led by the film censor and public intellectual Gordon Mirams and the influential educator  W.J. Scott.  Their campaign was assisted by several of New Zealand's intelligentsia, such as the poet A.R.D. Fairburn and Elsie Locke, author, shrewd polemicist and probably New Zealand's best known Communist at the time.
The Counter-Attack
The post-1945 decade  saw several key voices amongst the  younger generation of New Zealand's cultural personalities and intellectuals as well as some public figures, rise to defend movies in general and Hollywood cinema in particular. Mirams in particular came under increasing criticism for letting his political views, especially his anti-Americanism, influence his judgements. Most of these fresh voices did not share the left-wing ideologies of people like Mirams and Locke.  They did not follow the Communist party line  linking American cultural influence with American political imperialism. They also rejected the anti-semitism that was was a key part of  attacks on American popular culture, esoecially movies and music.Nor did they share the previously dominant cultural Anglophilia and glorification of 'high'culture.
​
NEXT: NEW ZEALANDERS' LOVE OF MOVIES