The Movie and the 'Juvenile Delinquency' Problem 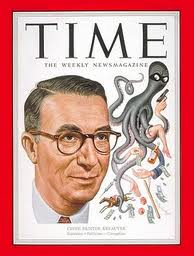 Kefauver and the 'Octopus' of delinquency.
Before the credits roll in The Blackboard Jungle a scrolling introduction appears on screen.
".... Today we are concerned with juvenile delinquency - its causes - and its effects. We are especially concerned when this delinquency boils over into our schools.The scenes and incidents depicted here are fictional. However, we believe that public awareness is a first step towards a remedy for any problem...."
Today The Blackboard Jungle's main claim to fame is that its soundtrack incorporated Bill Haley and the Comet's Rock Around the Clock, the first time a rock 'n'; roll sing was used in a movie, and a major factor in ensuring success for the song  and achieving publicity about the new type of music.
However, the movie remains a significant film for other reasons. Released in 1955, the film highlights an obsession of 1950s America - and other western countries too. There was a widespread fear of juvenile delinquency, focusing around claims that the post-World War 2 generation was lazy,spoilt, reckless, lacking in discipline, disrespectful of authority and violent.Teenagers of the time were condemned for their poor work and study ethos, and their spendthrift ways.
Such accusations have been made for several hundred years. What seemed to give special force to them was that in postwar America the complaints were made by 'experts' - psychologists, 'child behaviour' professionals, university researchers, and the expanding group of 'educators', consisting largely of people who commented sagely on classroom behaviour without suffering the indignity of actually having to teach adolescents for a living. The most famous example of 'expert' testimony was Fredric Wertham, whose book Seduction of the Innocent  alleged that popular media, especially in the form of comics, corrupted youthful minds and caused delinquency. murder, rape and homosexuality.
Thus the issue of juvenile delinquency often focused on schools, as indicated by the movie's introduction.Schools, especially in working-class and disadvantaged areas of big-city America were increasingly seen as a major cause of youthful misbehavior and teenage crime. Not only teenagers were blamed. Some critics also blamed their teachers for being lazy or too scared to assert their authority.
During the early fifties these  concerns were exploited by politicians, assisted by  cultural and civic elites who accused popular media, especially movies, music and comics, of morally and culturally corrupting youth. In the USA, Senator Estes Kefauver, in a bid to enhance his credentials in running for the presidency in 1956 chaired a Senate sub-committee on Juvenile Delinquency, examining its causes, with special emphasis on popular media especially comics. During this period politicians, academics and cultural elites in Canada, the U.K., France and Australia and New Zealand similarly attempted to exploit the issue in attempts to retain or enhance their privileged notions of culture on what they regarded as an unenlightened population.

The Blackboard Jungle - the novel by Evan Hunter 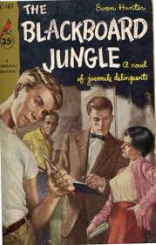 Evan Hunter (1926-2005) was born Salvatore Lombino in New York City. After serving in the navy in World War 2, he went to Hunter College, studying English, Psychology and Education. While trying to become established as an author he worked at several jobs, including seventeen days as a teacher at Bronx Vocational School in 1950.  His experiences there formed the basis for his short story 'To Beak a Wall', published in 1952, under his new name of Evan Hunter. (He later wrote a very successful series of crime novels under the pseudonym of Ed McBain). He extended his story into the 1954 novel The Blackboard Jungle, which had great success. From now on Hunter (under various pseudonyms) wrote a variety of novels, including A Matter of Conviction, about teenage gangs in New York. He also wrote many screenplays for television, and a few for movies. Th latter included his subtle and enigmatic script for Hitchock's The Birds (1963). 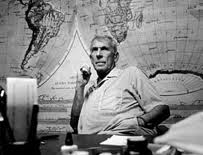 AFter graduating from university, Richard Brooks worked as a newspaper reporter and then a radio writer before he got a job writing B movie scripts in Hollywood. After serving with the marines in the war, Brooks wrote some novels and co-wrote the movies Brute Force and Key Largo, before becoming a director with Crisis. In 1955 Blackboard Jungle  made his reputation. He went on to make some big-budget 'serious' movies such such The Bothers Karamazov and Lord Jim,  both rather ponderous, and also made lively versions of Tennessee Williams plays  Cat on a Hot Tine Roof and Sweet Bird of Youth. His 1960 film Elmer Gantry  was an invigorating depiction of a crooked fundamentalist preacher in the 1920s, with great performances from its leads Burt LaRebel Without a causencaster and Jean Simmons. In 1967 he filmed Truman Capote's 'non-fiction novel, In Cold Blood. Made in black and white, shot on location, this film details a murderous rampage which wiped out an entire mid-western farming family and shows its aftermath. Brooks used music, photography and editing to suggest rather than show the horrific violence, and the film is much more effective for its restraint. It also has the remarkable effect of gaining some sympathy for one of the two murderers. His revisionist western, The Professionals, although wordy, is worth seeing for its cynical take on traditional themes of that genre.

Next: More about  Blackboard Jungle and its cinematic and cultural significance

Rebel Without a Cause: another 1955 movie about juvenile delinquency