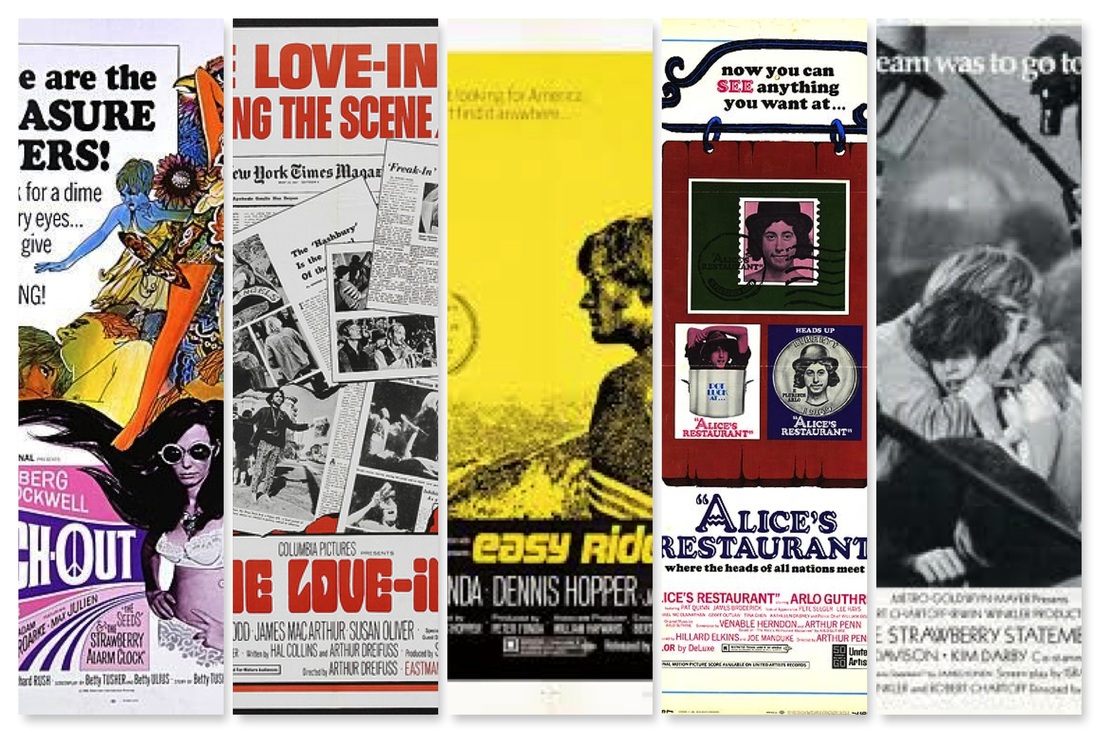 The decade spanning 1965 - 1974 was one of the most significant and  controversial in American history. During that period American society, politics, race relations and culture underwent profound changes. Dozens of movies were made in attempts to explain, exploit, condemn, praise or reflect aspects of that turbulent era. A handful were brilliant , including the best-known movie about that period, the musical documentary Woodstock.  A few, such as Easy Rider were very influential and remain iconic. Ironically,  Alice's Restaurant, the best movie about hippies and the counterculture, is ignored because it overturns the favorite cliches about that culture.  But most, such as Stanley Kramer's RPM,  and the Peter Seller's hippy 'comedy' I Love You Alice B. Toklas,  were terrible. Has a period in Hollywood's history ever produced so many self-indulgent and self-righteous films, or so many with shoddy photography banal scripts and plots, stereotyped characters, abysmal acting and clumsy directing? Fortunately, five decades later, even some of the worst movies of that period provide invaluable insights into the attitudes, tensions and values of the time.
The Woodstock concert still remains the most potent example of the American counterculture as featured in movies and immortalised by Michael Wadleigh and his team's superb concert film. More than thirty years after Woodstock, director Ang Lee's Taking Woodstock  used the event make his own wry, ironic and occasionally critical comments on the concert and its social and cultural significance.
In the late sixties and early seventies Arthur Penn' made two contrasting movie that commented on the counterculture.  His  pensive, gentle and little-known  Alice's Restaurant  was small-scale, had no big stars and a small budget.  After that he made  the epic, expensive, star-studded Little Big Man, a viciously funny condemnation of cherished stereotypes of Western movies, which cleverly used that genre to embody many of the values and beliefs of the counterculture, including a condemnation of the American military, a disdain for authority, cynical approaches to icons of American history and a gullible belief in the myth of the noble savage.
1969's Easy Rider was a pioneer of  the counterculture movie genre. In its cinematic style, characterisation and themes it was the exemplar of counterculture movies, providing a checklist of tropes that its successors checked off all too easily and too frequently. Extensive consumption of recreational  drugs .Nudity.  Bad language. Psychedelia. Anti-materialism.The open highway that isn't so free. Condemnation of the Man.Police as pigs. Emphasis on soundtrack music. Rebellion in various forms. AT the time, these features were novel and even refreshing. But decades later they appear trite, boring and stereotyped.Which is why, seeing Easy Rider now, the movie seems dated and rather tedious.
Michelangelo Antonioni's  1970  movie Zabriskie Point is a fascinating failure. In artistic  terms it is a profoundly unsatisfactory movie, with some of the worst dialogue and performances of any movie about the counterculture. It is pretentious, condescending, self-congratulatory and puerile. One of its prize scenes, a mass  hippy orgy in Death Valley, is laughably ludicrous. True, it has great photography, some marvellous locations, fine music soundtrack, an interesting slow-motion but overlong 'explosion' of a luxury house and contents. But the value of Zabriskie Point lies in the way it which it  inadvertently becomes an exposure  of the worst aspects of the  counterculture (and of most counterculture movies). It also provides insights into the approach  that many radicals and intellectuals (European and American) of the era adopted towards a cultural movement they tried desperately to identify with.
Barrie Shear's 1968 Wild in the Streets, unlike Zabriskie Point, is short, fast-paced, unpretentious, rather sloppily made and thoroughly entertaining and unashamedly exploitive. And its story is rather good. In the near future  youth have taken over America. Fifteen year-olds get the vote and the young ones promptly get their revenge on the older generation. The over-35s are sent to special "camps". The army is converted to a force dedicated to ensuring the adults are kept in their place.

Some  movies about the counterculture to avoid at all costs