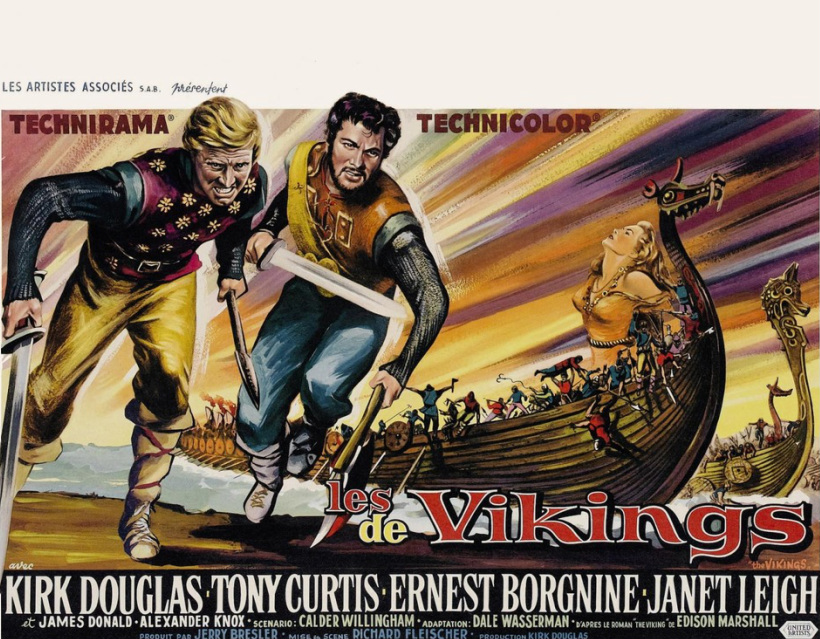 This lavish, exciting and (for its time) violent  1958 movie must be one the best action films ever made. No Viking movie comes close to equalling it. The movie has many favourable features. It's directed by one of Hollywood's most under-estimated talents, Richard Fleischer, with his trademark impeccable pacing and his genius at staging scenes of conflict and confrontation. The Vikings settings are authentic, picturesque and magnificently photographed by Jack Cardiff, who later went on to make his own Vikings movie, The Long Ships. The music is rousing, the editing slick. And the movie has performances by several of the most charismatic stars of the era: Kirk Douglas and Ernest Borgnine, both in rampaging form, Tony Curtis, and Janet Leigh at her most glamorous. And Calder Willingham's script deftly moves the action along while providing strong characters, considerable black humor and some good lines. He also incorporated some strong basic story-telling hooks that have been around for centuries - rivalry over a  beautiful woman, siblings whose relationship is concealed, revenge. The movie has some great set-pieces: a Viking funeral, the storming of a castle, rowdy celebrations at a Viking banquet and a Viking funeral at sea (nicely borrowed for the Thor movie sequel) For its time, The Vikings was remarakably violent - an arm is hacked off, an eye gouged out, a man is thrown alive into a pit of ravenous wolves.

Richard Fleischer, director of The Vikings

One of Hollywood's most under-rated and proficient directors 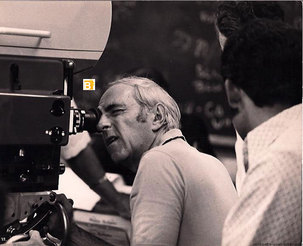 Fleischer at work.
Fleischer (1916-2006) had a remarkable movie-making career which lasted for four decades during which time he made 47 feature films and covering many genres, ranging from westerns, musicals, thrillers, war movies and courtroom dramas to action epics like The Vikings, and science fiction and even a religious epic (Barabbas). He worked extensively in Europe, making his home there for some time. The son of director Max Fleischer, famous for his Betty Boop  and Popeye cartoons, Fleischer moved from working on some of his father's cartoons to making documentaries (he won an Academy Award in 1947 for Design For Death, about Japanese expansionism during the war) to making increasingly competent  noir-action B movies. The stylish noirish 1951 movie Narrow Margin and the comdey Happy Time brought him to the attention of the big studios, and Disney signed him to make the big-budget early Cinemascope movie of Jules Vernes' classic 20,000 Leagues Under the Sea, starring Kirk Douglas and James Mason. The movie was deservedly a box-office and critical success. Fleischer's incisive pacing, deft command of action sequences, and ability to work with 1950s' special-effects and his knack of coaxing good performances from his stars means that the movie remains impressive today, and a perennial favorite with those who like their wide-screen action to speculate about bigger issues.
The success of Leagues made Fleischer a sought-after director, reinforced a couple of years later by The Vikings box-office popularity. He went on to make a wide-range of movies, covering many genres; his technical proficiency and fast output, as well ashis refusal to confine himself to 'prestigious' genres and themes probably resulted in his directorial ability being overlooked by the critics.
Fleischer's filmography included movies on controversial topics, such as Che!, Compulsion (Lindbergh kidnapping),The Boston Strangler and the dystopian sci-fi Soylent Green (about over-population and ecological disaster, made years before the emerging popularity of the Green movement. In 1975 he made what has been called the first big studio exploitation movie - Mandingo, a savagely brutal film about American slavery and its moral and societal consequences. The British critic Robin Woods  described it as "the greatest film abour race ever made in Hollywood." The film flopped. Decades later Tarantino uplifted much of the film's violent ethos and subject-matte, if not its daring political and social perspective, when he made Django Unchained.
A series of taut, noirish  thrillers made in the late 1940s and early 1950s gave Fleischer the opportunity to make the big-budget special-effects spectacular 20,000 Leagues Under the Sea for Disney. It starred Kirk Douglas.
The remarakable range of Fleischer's movies is indicated by the selection above:

The making of The Vikings: when egos collide 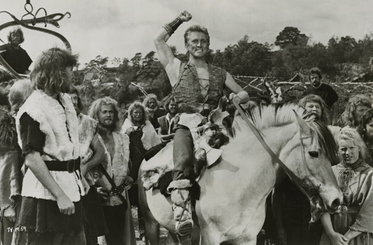 Douglas on location, surrounded by admiring extras.
Kirk Douglas was both the star and the leading force behind The Vikings. It was on his authority that Richard Fleischer was hired as director, Fleischer having previously worked with Douglas on 20,000 Leagues Under the Sea. But Fleischer, like Douglas, was feisty and forceful, and the two clashed repeatedly during production. The director devotes a fascinating chapter to the movie in his very readable 1993 autobiography, Just Tell Me When to Cry:Encounters with the Greats, Near-Greats and Ingrates of Hollywood (New York: Carroll & Graf). He summarised his relationship with Douglas: "You don't make pictures with Kirk; you survive them."
Fleischer claimed that when he set out to make The Vikings, "it promised to be great fun - a roistering, rowdy swashbuckler; plenty of action, sex and violence; and it all took place in a romantic, time-shrouded period of history that hadn't been done to death in a hundred other movies." He had two goals in mind: "quality and authenticity." But Douglas hated the original script, much praised by Fleischer, and brought in Calder Willingham to do a complete re-write, which Fleischer detested. "Goodbye semiclassic; hello comic book" was the director's typically brusque reaction.
Unsurprisingly, relations between the two remained fraught during the shooting, as the crew and stars coped with recalcitrant Vking repica ships, out of control fires, weather that was unseasonably warm, strking extras and the problem of how to make the  dogs masquerading as wolves appear suitably vicious, plus Tony Curtis worried that his role might sully his nice-guy image. Above all, Fleischer was annoyed by Douglas' interference in directorial decision-making, although he freely acknowledges the star's charisma, work ethic and determination. Sadly, the two never again worked together - Kirk Douglas had a long memory and did not take kindly to his directors standing up to him.

The lasting appeal of The Vikings - why?