Scola's movie, like the actual historical event, is about a coachload of passengers and their journey, on 20-21  June 1791,  to Varennes-en-Argonne, a small town split by the river Aire. The real-life passengers were KIng Louis XVI of France, his wife Marie-Antoinette and the royal children. Their  intention: to escape their virtual imprisonment at the Tulieres Palace in Paris at the hands of the revolutionaries by fleeing to Montmédy in Lorraine, and there assemble forces to restore royal power. The passengers in La Nuit de Varennes, however, were certainly the royal family. Instead they were a mix of the fictional and the historical, and the varying purposes of their journey were entirely fictional.
The movie's historical figures included 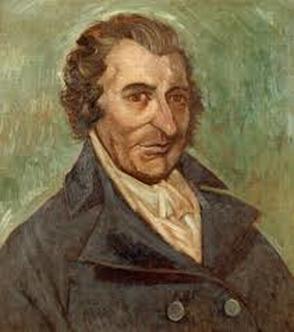 Thomas Paine
Thomas Paine was one of the leading intellectual figures in the revilutionary era of the late eighteenth Century. Born and educated in England, he played influential roles in both the American and the French Revolutions. Benjamin Franklin helped him emigrate to Amereica in 1774. His journalistic talents resulted in the 1776 best-selling pamphlet Common Sense, in which he condemned the British monarchy and government, and argued for American independence from Britain and the establishment of a republican system of government.
In 1787 Paine left the USA for Europe, and resumed his role as a revolutionary propagandist., eventually moving to Paris to participate in the revolutionary upheavals in France.
He was made an honorary citizen and even elcted to the revolutionary assembly, the Convention. But his opposition to the Terror and the execution of King Louis XVI was him arrested, imprisoned and condemened to death on trumped-up charges of treason. Only the intervention of US President James Monroe saved him. On his feturn to the USA Paine faded into eventual obscurity and poverty.