303 Squadron: the Polish Air Force in the Battle of Britain

The heroic pilot movie poster image and the rather more mundane and realistic photos of Polish 303  Squadron crew plus mascots .
After the fall of Poland to German and Soviet forces in September, 1939, individuals and units of the Polish defence forces continued  their struggle against the Nazis in France, including units of the Polish Air Force. Following the fall of France and the evacuation at Dunkirk, about 30,000 Polish servicemen relocated to England. Their numbers included some 8400 pilots.  Subsequently,  an agreement between the Polish Government in Exile (located in London) and the British Government, two Polish  fighter wings were created: 302 'Poznan' squadron and 303 Kosciuszkco squadron. Other Polish pilots flew in fighters and some bombers under direct RAF control.
The Polish Air Force's  role in the second World War had actually begun at the very start of the conflict. As the website AIR WIB HIstory points out, although the PAF was outnumbered three-to-one by the Luftwaffe and its planes lacked the modern innovations of the German aircraft which tried to wipe out all Polish aircraft on the ground at the very start of the invasion, the Polish aircrews in their 445 combat units  fought on  for two weeks and against the Germans' 1,302 planes, many of which were the new and deadly Messerschmidt Bf.109. Furthermore, the Polish pilots had undergone rigorous training sessions before the war. During the first six days of the invasion the PAF shot down an estimated 105 aircraft while losing 79 of their own.
The PAF';s bomber force - 120 P23 Karas and 36 P37 Los strike planes and bombers, although outnumbered and outgunned,  also  proved effective in harassing the columns of German Panzer tanks invading Poland, stalling the German army advancement to such a degree that the Army  demanded the Luftwaffe provide better fighter cover 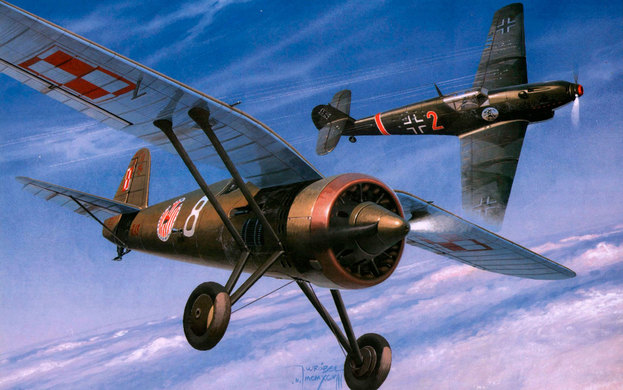 Artist's impression of combat between the Luftwaffe's Messerschmidt 109 and the Polish Sir Force's PZL.P.11. Below two views of the Poles' PZL.P.11
The P.11 was the fighter the outnumbered Polish Air Force relied on in their attempts to ward off the relentless German air attack at the start of World War 2.  Not only did the Nazis have numerical supremacy in the air. Their  Messerschmidt 109 and 110 aircraft were more modern, better armed and faster (even the Luftwaffe's bombers were faster than the ageing PZL machines.) Despite the long-lived myth that the Polish Air Force was virtually destroyed during the first couple of days of the German onslaught on Poland, it managed to hold out for two weeks against overwhelming odds. Although the P.II was antiquated in many ways, the plane had some advantages. It was solidly built, good pilot visibility, had a short take-off even from improvised airfields, and a rapid rate of climb as well as the ability to dive at 600 kph. And several days before the outbreak of war the PAF had dispersed aircraft to  satellite fields
Despite the German superiority, the P.11s managed to shoot down a considerable number of German aircraft, including fighters, but suffered heavy losses as well. A total of 285 German aircraft were lost according to Luftwaffe records, with at least 110 victories credited to the P.11 for the loss of about 100 of their own.
(Acknowledgement: Some information derived from section on Polish Air Force in WW2 on Warisboring.com)