In June 1946 the streets of London were  crammed with crowds celebrating the Allied Victory Parade in which flags and military units   of the various Allied nations that had fought in the war were paraded in a huge procession. Countries represented  ranged from the USA to Nepal, Mexico and Luxembourg. But  the parade itself was emblematic of the rivalries resulting from a new and different international conflict: the Cold War. Three combatants were missing from the parade - the USSR, the newly formed Communist state of Yugoslavia and the Polish forces such as the various Polish Air Force squadrons. 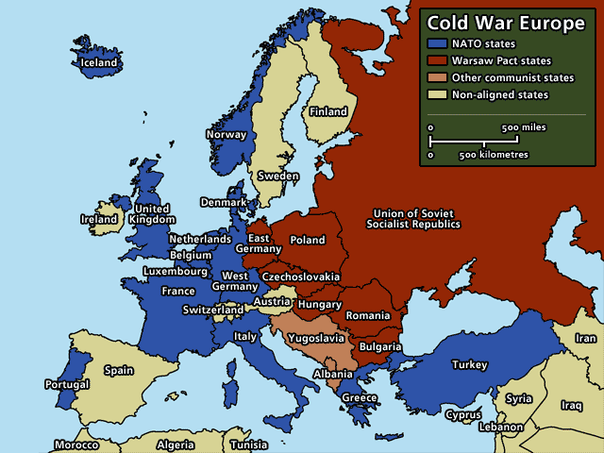 Even before the  defeat of Nazi Germany in mid-1945 a new form of international conflict was dividing Europe. The Soviet Union's military and political imperial expansion into former Nazi-Axis controlled states such as  Poland, Czechoslovakia, Rumania etc was denounced by its former western allies. The resulting rivalry between the two power blocs soon became  known as the Cold War. This immediately  had unfortunate consequences for those over
200 000 Poles who had fought on the Allied side. They had pledged loyalty to the Polish government-in exile (stationed in London during the war).This body included a wide range of political groups from left to right, but excluding the Communists.  This government-in-exile had been working on a programme of social and democratic reforms to implement when the war ended. However, its members along with those of the Polish armed forces who fought on the Allied side  bitterly opposed the Soviet Union both for its dictatorial nature and for its role in the 1939 Nazi-Soviet Pact which divided Poland between Germany and Russia.
Above left: Polish pilots in 304 Bomber Squadron. Above right: August, 1939: three Polish destroyers leave Polish waters en route to Britain
Unfortunately for the Poles the Yalta Meeting of February 1945 between Churchill, Roosevelt and Stalin tried to solve mounting diplomatic and strategic tensions between the big three powers at the expense of Poland. By this date Soviet troops had already moved into Poland and taken control.
a procommunist provisional government had been set up and Stalin was determined that Poland would come within the USSR's expanding empire. Although the USA and Great Britain believed that the London-based noncommunist Polish government-in-exile was most representative of the Polish people, both countries gave in to Russia's dominant de facto control. Yalta's  final agreement expressed the pious hope that a “more broadly based” government should be established in Poland. Free elections to determine Poland’s future were called for sometime in the future. Many British and American officials opposed the agreement, realising that it was condemning Poland to the status of a a puppet-state with the Soviet empire. But in harsh reality, what could Roosevelt and Churchill do, given Russia's entrenched strategic and military position in Poland.  Start another war over Poland?
By 1946, with Churchill out of power after the 1945 General Election, the Labour government of Prime Minister Clement Attlee decided to accept that Russia was in control of Poland and and a broad-based democratic Polish government and state was impossible. Accordingly, Britain recognised the Communist-Russian dominated Provisional Government of National  Unity, soon to be renamed the Polish People's Republic.
Unfortunately, one consequence of this diplomatic about-face was that no Polish forces who had fought for the Allies were represented at the Allied Victory Parade. in order to appease Russia.This caused a controversy continuing to this day, with Churchill, other politicians and members of the RAF and other British armed forces protesting in vain.

The USSR swiftly set about removing removing supporters of the wartime government -in-exile in order to prevent their plans to establish a democratic postwar Polish government in its form as the short-lived Polish Government of National Unity set up in March, 1945.  The above image illustrates  the show trial of 16 leaders of the National Government  in Moscow in June, 1945. The sixteen included leaders of the Polish Underground wartime resistance to the Nazis. They were kidnapped, taken to  Moscow, tortured by the NKVD, forced to sign false 'confessions' and put on trial for "drawing up plans  for military action against the USSR".